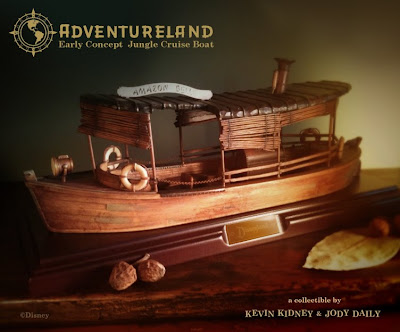 Edition Size: 500       Release Date: TBA
Hollywood set designer and legendary Imagineer Harper Goff was one of the world's greatest visionaries, in our humble opinion.  Not only did he create the most fantastic movie submarine ever to transport our imaginations 20,000 leagues under the sea, but he designed a chocolate factory for Willie Wonka and a famous cafe in Casablanca.
And he also played the banjo!
We love Harper Goff, and if you're a Disneyland fan then you must love Harper Goff, too.  His creative touch can be seen all around the Park, most notably along Main Street U.S.A., and in the deepest jungles of Adventureland. The little canopied launches that cruise the world's exotic waterways were first conceptualized by Harper in 1954.  His sketches of the Amazon Belle, Congo Queen and Suwannee Lady show vessels more rugged and "travelled" than the shiny bright boats that appeared on opening day.
Based on Harper Goff's original concepts for Disneyland's "jungle ride," our model of the Amazon Belle looks as though it may have crossed the Mekong, borne the rains of the Irrawaddy, and survived the rapids of Kilimanjaro a million times before.  It's just the thing to display in your study next to that rhinoceros head you brought home from Borneo.
This item, celebrating Disneyland's 55th Anniversary, will be released later this summer.  Stay tuned for more information!
Posted by Kevin Kidney at 1:46 AM

Perfect for Kate and Bogie...

Gorgeous. That there will only be 500 makes me nervous.

This is gorgeous. I think even Walt Disney would have wanted this.

These vehicles and the cast members series are so cool. Can't wait to see more of both.

Wow! That is a must have for my budding Jungle Cruise collection.

Another fantastic piece ! I cant wait to get one.

LOVE this--great post and great model; would love to get myself one...Plus, you definitely created a Harper Goff fan in us!