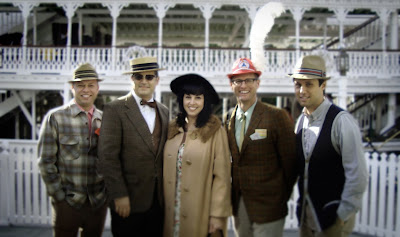 You know how a wool coat smells when it gets wet?  Not great.  So it was especially considerate of last week's storm clouds to part for 24 hours and let the sun shine on Dapper Day at Disneyland. If you couldn't attend last Sunday, rest assured there will be more.
As expected, a fair percentage of participants showed up in vintage Sunday best, and put great effort into staging photographs worthy of Vanity Fair.
For more pics of dandy peeps, visit the excellent United Style site.
Posted by Kevin Kidney at 5:32 PM 8 comments: 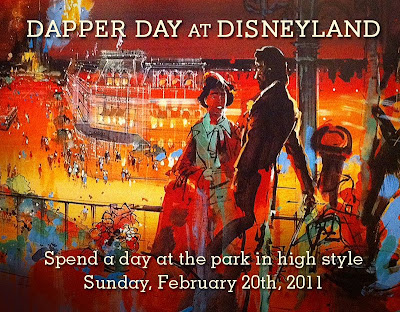 The original Disneyland designers frequently populated their renderings with guests dressed for a day of sophisticated entertainment.  No flip-flops or cargo shorts here!  These were men in sharp suits, toddlers working two-pieces, and ladies looking like they just stepped out of Dior's sketchbook - all as if a visit to Disneyland were on par with a night at the opera.  And why shouldn't it be? 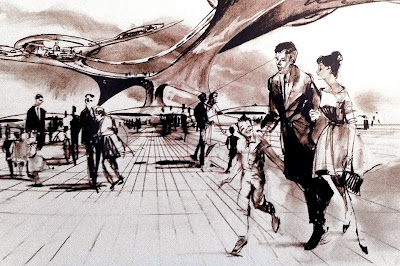 To the 9's in Tomorrowland
This Sunday's Dapper Day at Disneyland is the idea of Los Angeles designer (and fellow classic Disneyland fan) Justin Jorgensen.   On the event's Facebook page,  Justin explains that the unofficial day is all about "realizing those designers' dreams that Disneyland be seen as the upscale entertainment experience that it is, filled with guests dressed appropriately for it." 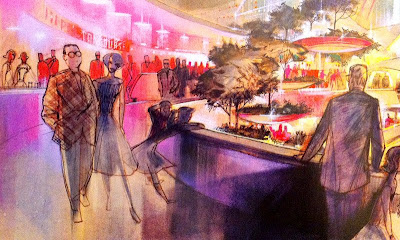 Justin suggests that dressing in a period "Man Men" look is as correct as the latest haute couture.  "Be creative, go Gaga, anything that would make legendary Disney designers Herb Ryman, Mary Blair, John Hench, Dorthea Redmond, Harriet Burns and the rest of the stylish WED lot look proud - or blush!"
Sunday, February 20.  1200 noon to 11:30pm.
Bring your camera.  Stage an impromptu photoshoot.  See you at the park. 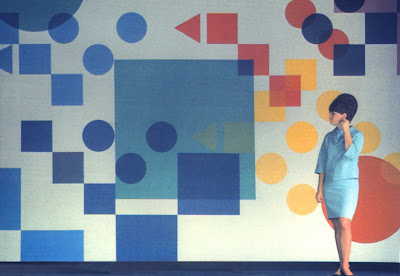 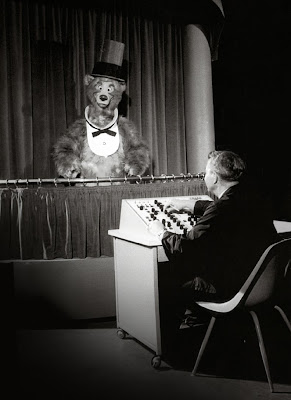 The man behind two of my favorite things, the Silly Reindeer and the equally Silly Buffalo, passed away this morning.  Bill Justice was one of my creative idols.   I got to meet him only a handful of times in my career, and once he even telephoned me at work just to compliment me on some drawings I did for his granddaughters.  He will be missed.
Posted by Kevin Kidney at 7:02 PM 5 comments: 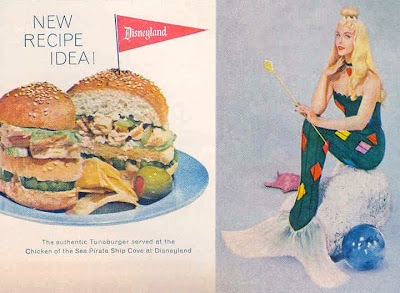 Here's the authentic recipe for the Chicken of the Sea Tunaburger precisely as served at the Disneyland Pirate Ship.  And guess what? It's really good. Try it!
This recipe serves 4 hungry theme park guests:


Mix one can of Chicken of the Sea Tuna with 1 tablespoon of chopped onion, a quarter cup of chopped celery, a teaspoon of lemon juice, and two tablespoons of mayonnaise. Slice 4 hamburger buns (the kind with sesame seeds) into 3 horizontal sections. Spread tuna mixture onto the middle bun slice.

Now mix 2 more tablespoons of mayonnaise with 2 tablespoons of catsup (it'll make kind of a 1950s version of pink "thousand island" dressing); spread that onto the bottom bun slice and cover with a layer of sweet pickle slices.  Put all the sections together to make a a "triple decker" sandwich. 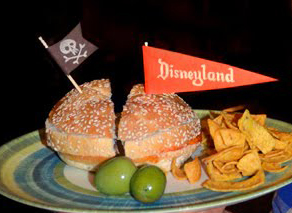 Serving suggestion:  Turn this into a real vintage Disneylander's lunch with Fritos and a Pepsi!
Posted by Kevin Kidney at 12:42 AM 11 comments: 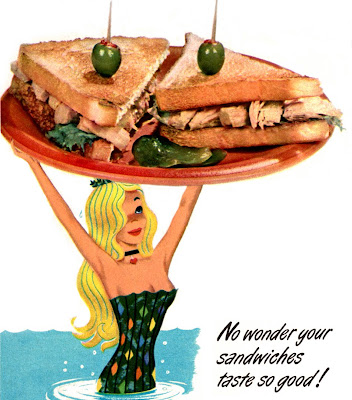 White or wheat?
Roll up your pant legs and let's wade out into the lagoon for one final visit with our favorite corporate mermaid and the Chicken of the Sea Pirate Ship, a Disneyland landmark for 27 years.

Side elevation for the ship's attractive figurehead
The blonde mermaid first began hawking canned albacore in 1952 .  Anyone out there know the name of the artist who created her?  A lot of us around here would love to know that bit of trivia. 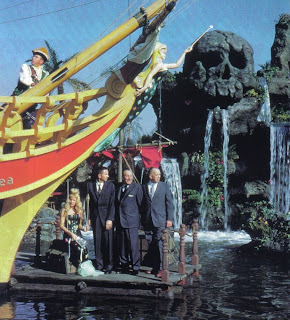 In 1960, a fantastic tropical environment was added all around the Disneyland pirate ship, with waterfalls and the stoney face of Skull Rock.  To rededicate the restaurant, Walt Disney posed for publicity with the owners of the Van Camp Sea Food Company, Frank Van Camp Sr. and Jr. ...and the mermaid in person. 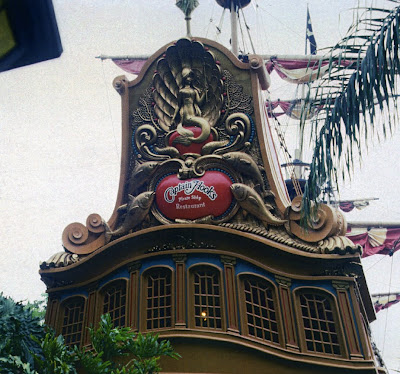 By the 70s, the sponsorship by Chicken of the Sea had been canned, and the distinctive mermaid figurehead removed to places unknown (by me anyway).  Surprisingly, though, the mermaid adorning the stern remained with a few alterations to obliterate her corporate identity. Her familiar hair bun was sawed off and the diamond shapes on her bodice and tail were sanded away. I don't know about you, but the disguise doesn't fool me! 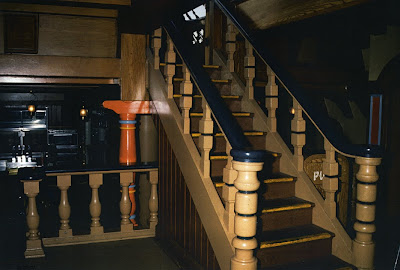 C'mon, let's step downstairs into the hull and see what the interior looked like in the 1970s. Except for the prices on the menu, very little had changed since 1955. 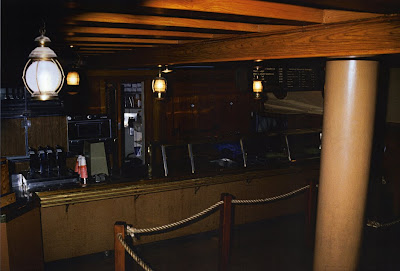 The serving line was still pretty much the way it had always been.  (Are you checking out those cool paper cups, too?) 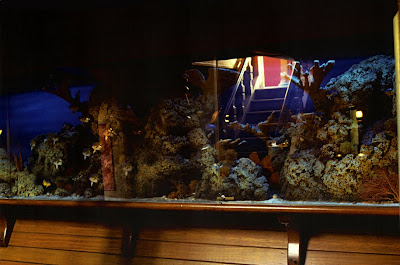 One noticeable difference , however: the original three-paneled mural with its canned tuna and frozen dinners has given way to a waterless aquarium diorama.  Nicely done, but we all prefer the mural, right? 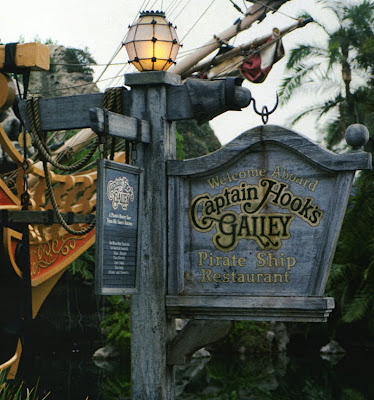 (Always be wary of anything under new management!)
Outdoors beside the gangplank, we could still encounter the original sign post from 1955, but repainted and naturally aged.  The smaller framed sign that hangs to the left read: "Captain Hook's Galley - A Pirate's Hearty Fare From Mr. Smee's Kitchen...Hot Roast Beef Sandwich, Hot Meatball Sandwich, Tuna Burger, Clam Chowder, Chef's Salad, Tuna Salad, Drinks and Desserts."
Well, at least the Tuna Burger was still an option! 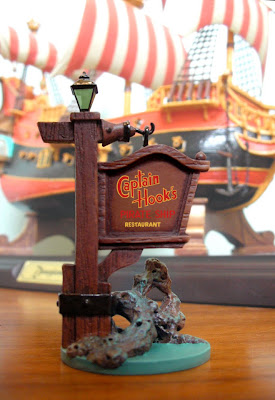 For our new Fantasyland Pirate Ship replica, we naturally chose to recreate the 1955 versions of the boat and sign, but, as you might imagine, some details, such as the restaurant's original sponsor name, were not permitted. (I know, I know. Not our call.)  Nevertheless, Jody and I did everything else we could to "capture the feel" of the original aesthetic.  We both were fortunate to visit the ship as kids, and hold happy memories of lunches with our families while dreaming of sailing out to sea under those red and white striped sails.
Our replica took six years to make, if you can believe it.  If you've already got one for yourself, I sincerely hope you are loving it as much as we thoroughly loved researching and working on it.
Posted by Kevin Kidney at 4:03 AM 8 comments: