In L. Frank Baum's 1907 book Ozma of Oz, Dorothy discovers a clockwork man in a chamber cut in rock in Wheeler Country.  "He was only about as tall as Dorothy herself, and his body was round as a ball and made out of burnished copper."  Illustrator John Neill's accompanying pen and ink drawings provided the key to re-creating Tik Tok for the 1985 movie, Return to Oz.  Three variations were built for the film—two "dirties" in various states of disrepair (today one resides at Skywalker Ranch), and one "bright 'n shiny" used only in the coronation scene at the end of the film.  The shiny model, pictured here at Disneyland's offsite Entertainment Development in 1985, is now in the Disney archives. 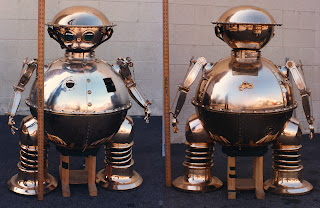 So utterly likable, Tik Tok is my favorite character in the film for his design.  He's a wind-up, walking-talking marvel of steampunk wonderfulness. Where do I begin to explain what I love about this guy? Let's start at the top: 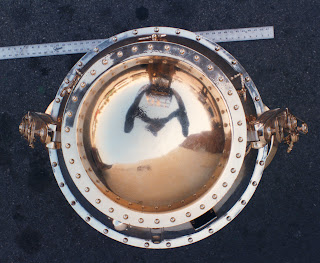 The concentric rings of Tik Tok's construction can't be fully appreciated in the film, so I'm grateful to the mystery photographer (reflected in Tik Tok's shiny pate) who appears to be bridging the prongs of a forklift with his own two legs.  That's dedication! 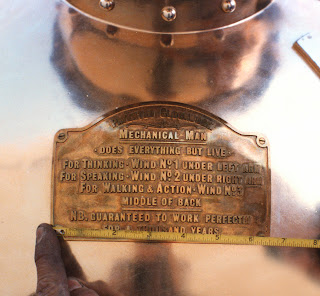 Fortunately for Dorothy, the Patented Clockwork Mechanical Man comes with instructions, cast in metal and screwed to his back. 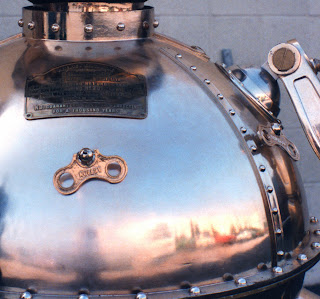 His "action" key is located smack in the middle of his back. 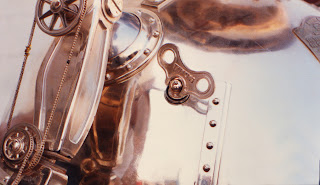 The key for "thinking" can be found behind his left shoulder.
Do you wonder what he's thinking about?  Let's wind up his speech and maybe he can tell us. 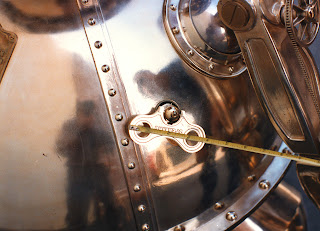 The keys that supposedly power Tik Tok to do "everything but live" were actually battery-powered so they could run down on cue. The "speaking" key is located behind his right shoulder.  And speaking of shoulders,  Tik Tok's are beautiful: 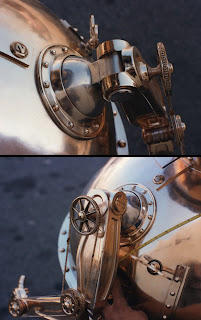 The small chains that drape from shoulder to elbow to wrist were purely cosmetic. They didn't actually do anything at all, except look terrific. 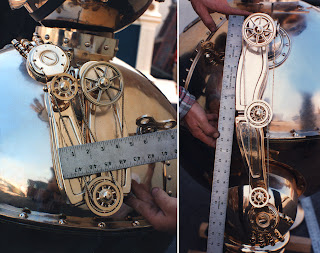 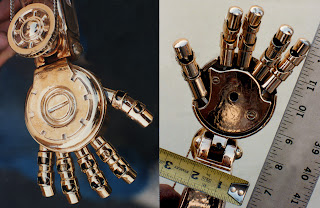 Tik Tok is made of lightweight Kevlar, a super strong polymer, cut into sheets and pieced together. Though a difficult material to work with, its sturdiness reportedly held up to Tik Tok's many face-forward dives during filming. 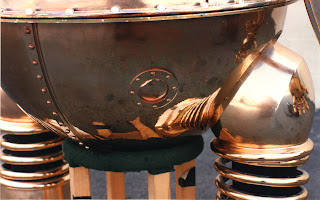 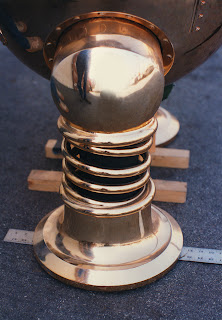 It's great fun watching Tik Tok come to life in the movie, especially in scenes that show him walking. Tik Tok's peculiar stomp was acted out by a live performer crammed inside his spherical torso—a 23 year old gymnast named Michael Sundin. 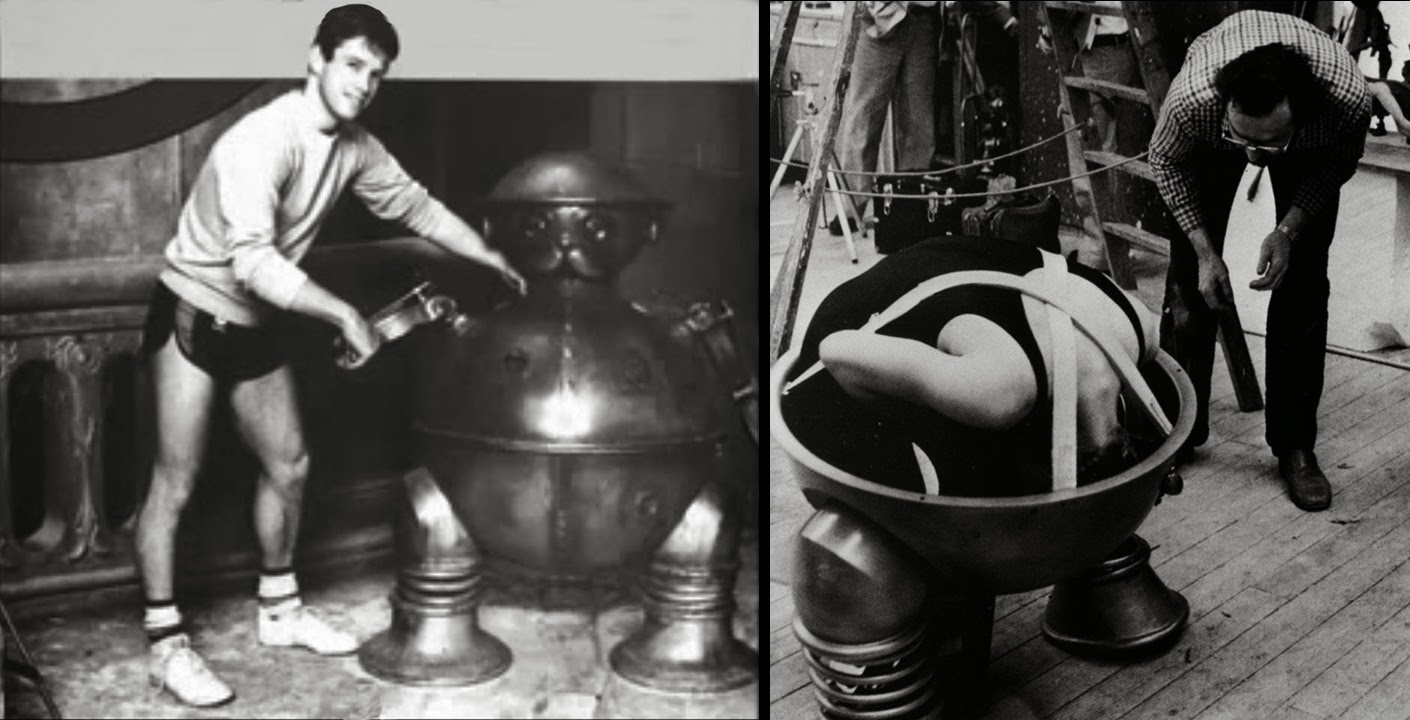 Creature creator Lyle Conway described the grueling process in Cinefex Magazine: "Michael was about five five and Tik Tok's about four foot.  So Michael had to bend with his head between his legs, bolted in, and he did the actual walking around in the thing—backwards.  Sometimes, in the morning, he wouldn't be able to fit; so it was just a matter of forcing him in.  Then everything loosened up, and his body settled into it.  When you took the suit off of him, this rush of hot air hit you and there were pools of sweat at the bottom of the thing." At first Sundin was imprisoned within the mechanical man for no more than fifteen minutes, though by the end of shooting, he could endure almost an hour. 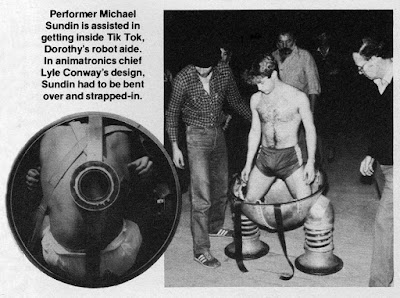 Michael Sundin, himself, has a fascinating story, and in his short lifetime —he passed away tragically of AIDS at the age of 28—his career took some interesting turns. He was a dancer in the original London stage production of Cats when he was discovered by Disney and cast as Tik Tok.   Following Oz, Sundin performed as the creepy March Hare in Jim Henson's film Dreamchild (1985) and went on to become a television host of the long-running British kids' show Blue Peter.   In doing my research for this article on Tik Tok, I was struck by Sundin's unique life and saddened by the loss of this talented young person who seemed well on his way to a bright future.

One of Tik Tok's memorable lines in the film is "I am not alive and never will be, thank goodness."  But inside, he had a human soul. 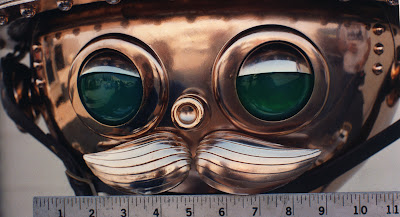