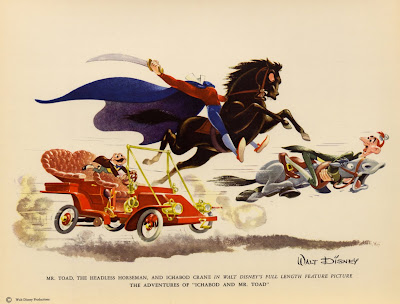 One of the most fun studio fan cards ever, promoting the 1949 debut of two fabulous characters in one fabulous film:  The Adventures of Ichabod and Mr. Toad.   So full of action and excitement, it's hard to resist these 7"x 9" cards for fans who wrote the Walt Disney Studio.
Unlike the flat painted animation cels seen in the movie, promotional materials like this allowed for the characters to be more fully rendered to a higher level of detail.
Artist Hank Porter created the illustration of Toad in his motorcar racing alongside Ichabod Crane and the Headless Horseman, and here is the original sketch!  I think it's beautiful. 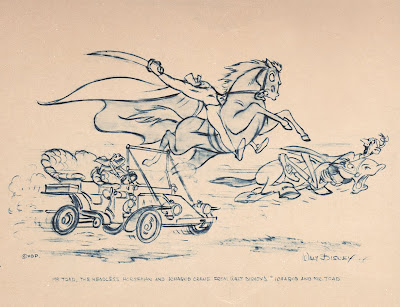 Spirited Away by the Headless Horseman

"Next morning, Ichabod's hat was found... and close beside --a shattered pumpkin...
but there was no trace of the school-master."
Posted by Kevin Kidney at 4:15 AM 8 comments: 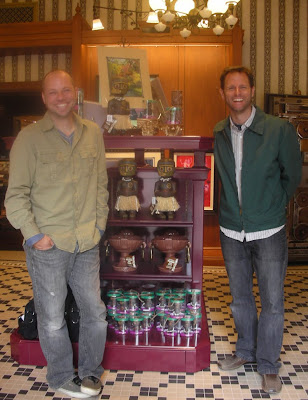 Our fresh assortment of Enchanted Tiki Room items are on display in the beautiful new Disney Gallery.  If you're making a visit to Disneyland, be sure to stop in and see the new space located in the original Bank of America on Main Street, U.S.A.
If you can't get to Disneyland but would like to purchase anything from the Gallery, you can call Disneyland's DeliverEars Service (800) 362-4533 to have any item delivered directly to you.
Thank you.  That is all.
Posted by Kevin Kidney at 3:42 AM 14 comments: 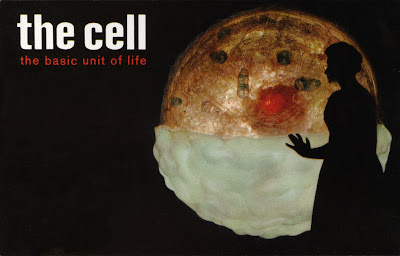 If, like me, you're enthralled with mid-century science and classic Disneyland, no doubt you've come across this odd 1950s Upjohn postcard for the Basic Cell display at the pharmacy on Main Street.  Hardly anything has ever been written about this curious exhibit, so I think it's time to change that right now. 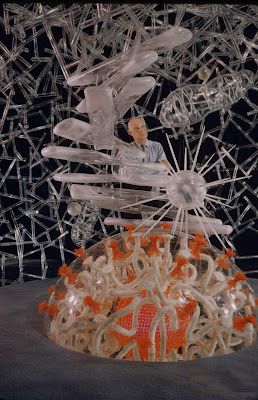 German-born designer Will Burtin was a graphic designer for Fortune magazine and the Upjohn Company, specializing in "scientific visualization."  He had designed Upjohn's entire product line of medicine bottles, ointment tubes and packaging - and even the company letterhead.  In 1957, Burtin convinced Upjohn's president Jack Gauntlett and Dr. Garrard Macleod, director of special projects, to fund the construction of a large-scale scientific model, a human red blood cell 24 feet across and 12 feet high.  It was so big, folks could enter and walk around inside...on carpet! 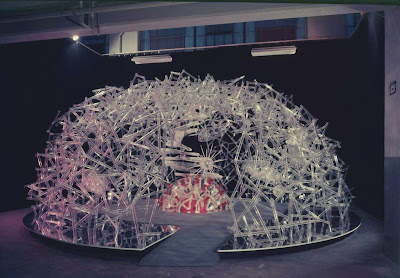 Built of plastic tubing, wires and colored lights, the soon-to-be-famous model would be a tactile representation of a virtual human cell.   Not an actual representation of a cell, since too much was still unknown about cells, but a "giant, physical manifestation of a designer's vision" of how a cell functions.

The walk-thru model, one million times larger than life, was unveiled in September 1958 at the American Medical Association's meeting in San Francisco.  It was a sensation, and would eventually pave the way for Burtin to create four more fantastic scientific models for Upjohn during his career. 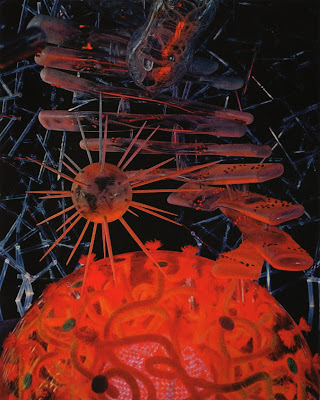 The full-sized Cell was an instant smash hit with scientists and non-scientists alike, but it was too huge to be easily moved, so Burtin designed a smaller version.  The new Mark II model was 6-feet tall and made its debut at a special reception in the foyer of the Los Angeles County General Hospital on August 12, 1959.  Like its larger predecessor, the new Cell was a marvel, described in a full page article in the Illustrated London News as "a glowing and mysterious hemisphere." 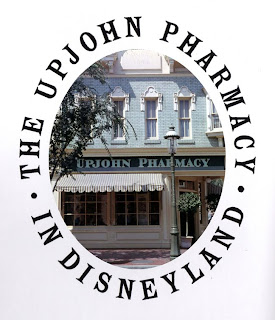 For the opening of Disneyland in 1955, Burtin had designed the interior for the Upjohn Pharmacy on Main Street U.S.A.  Burtin and his wife Hilda had spent months collecting antique medical paraphernalia, period glassware, patent medicine powders, weigh-scales, and pharmacological books to furnish Walt Disney's turn-of-the-century drugstore.  Now Burtin's 6-foot "Basic Cell" would be added to the exhibit in a small room adjacent to the Pharmacy (today's jewelry counter in the rear of the Fortuosity Shoppe.) 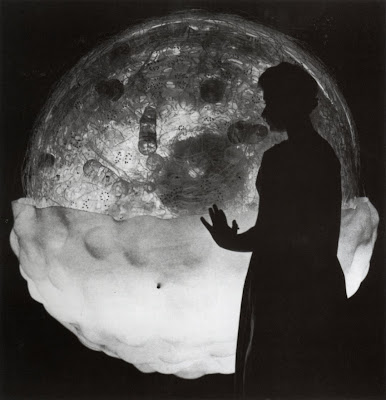 It's estimated that two million people saw Will Burtin's Six-Foot Human Cell during its brief stay at Disneyland.  Certainly Upjohn must've felt they got their money's worth of publicity value, as visitors  left the exhibit with pieces of Upjohn literature, including a color souvenir postcard of the model with Burtin's teenaged daughter Carol, by photographer Ezra Stoller. 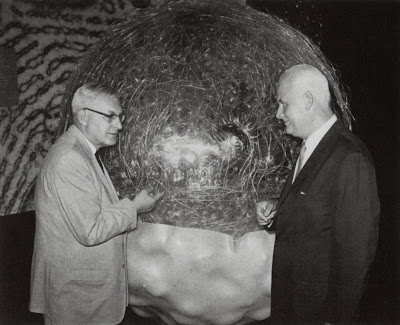 Will Burtin (right) with Dr. A. Gerrard Macleod in the Cell exhibit

From Disneyland, the cell traveled to the San Francisco Academy of Sciences, and pictures of it appeared in magazines, text books and science films throughout the 1960s and into the 70s.  Will Burtin believed that designers had a responsibility in the age of science to attempt to make complex scientific problems easier to understand.  In Burtin's mind the role of designer and teacher were interchangeable, and he hoped to inspire through his craft.

If you found this interesting, there is a wonderful new book available on Will Burtin's design work and his beautiful scientific models.
Design and Science, The Life and Work of Will Burtin by R. Remington and R. Fripp is available from Amazon.  Order your copy here now!
Posted by Kevin Kidney at 5:21 AM 7 comments: 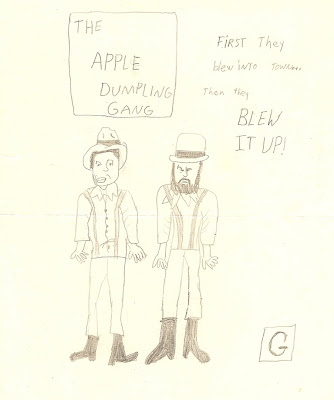 It's rated G!
A tip of the hat to my mom today who just unearthed this little masterpiece from God-knows-where.  I don't remember doing this at all, but I do recall that at age nine, I was enthralled by Don Knotts and Tim Conway.  With that criterion, The Apple Dumpling Gang was cinematic perfection.
Plus I'm sorta proud to admit it kinda looks like them!
Posted by Kevin Kidney at 11:55 PM 6 comments: 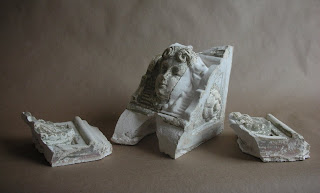 In September Jody and I lent a hand to the restoration of one of the historic homes in Anaheim, a 2-story Victorian house built in the late 1800s.  As the whole house had recently been lifted off its foundation and relocated to a new street, some of the home's interior details had suffered during the move.
This beautiful plaster corbel is one of several that had decorated a dining room window. Tragically, during the move all the corbels had come loose and were smashed on the floor. Only this one, broken into four pieces, was remotely salvageable. 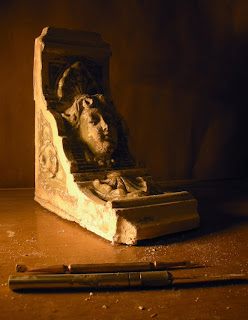 After gluing the pieces back together, we very carefully removed a century of paint layers, uncovering the crisp details of the original sculpture. Then the cracks were filled and smoothed,  and a few small details that had chipped away were resculpted. When it was all done, the corbel was handed over to a moldmaker to cast replacements for the ones that had been destroyed. 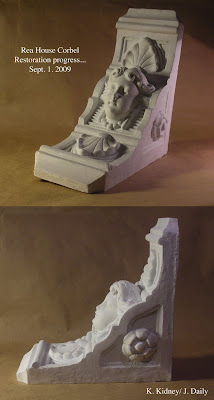 Soon we'll get to see the corbels replaced in the newly restored dining room, and a little bit of history will live on.  Stay tuned! 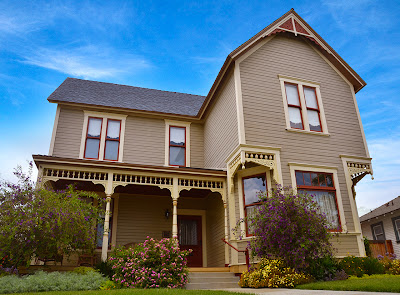 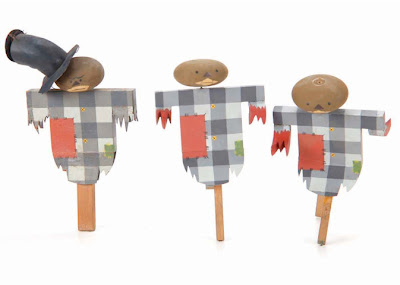 Oh boy, if I had the money, I could spend a fortune on the incredible stop-motion puppets currently being auctioned off by Profiles in History. 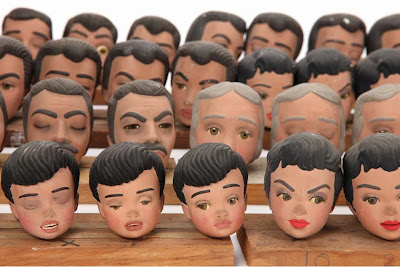 Ranging from original figures made by Wah Chang for George Pal's Puppetoon shorts Tubby the Tuba and John Henry, to hundreds of intricately hand-sculpted "replacement" heads and characters from Paramount and the Nassour Brothers Studios.  The sheer volume and quality of the artwork in this auction (which ends Friday) is astounding. 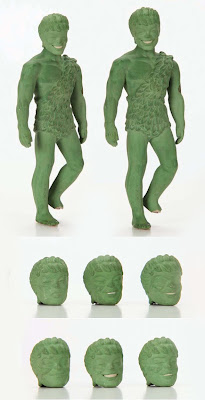 If you're planning to try your luck getting any of these treasures for yourself, you can thank your stars that I'm not bidding against you! 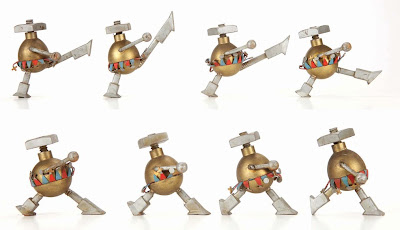 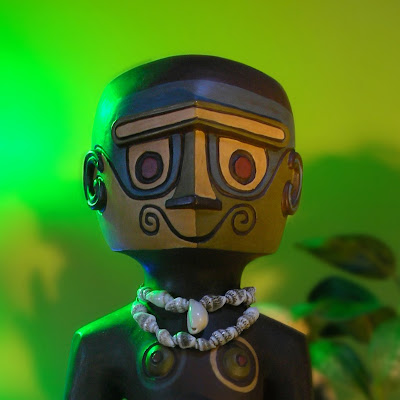 The Disney Gallery has re-opened at Disneyland in a beautiful new location - inside the original Bank of America on Main Street, U.S.A.  Jody and I have designed an assortment of brand new Tiki Room items for the new Gallery.  If you're unable to get to Disneyland, you can call Disneyland DeliverEars Service (800) 362-4533 and have any of our items shipped directly to you. 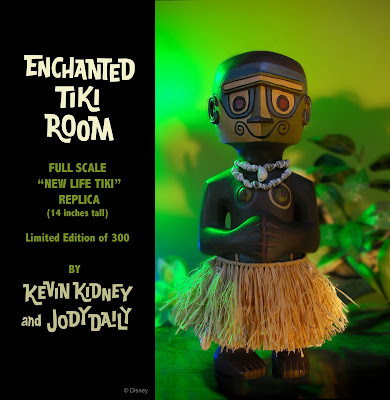 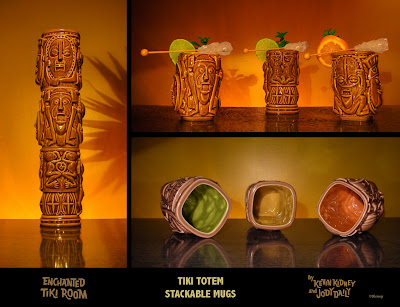 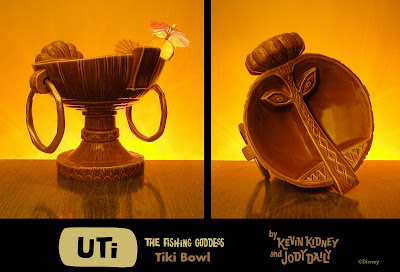 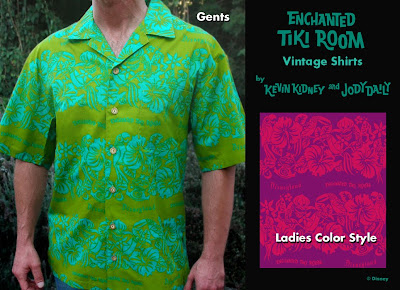 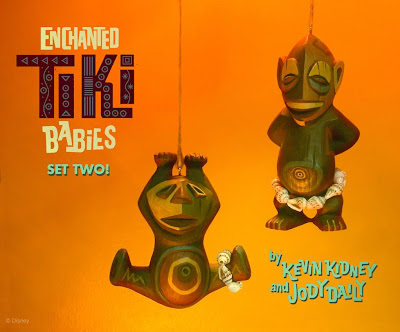 For additional information on the event and prices, please visit
The Disney Gallery's Official Website.
Posted by Kevin Kidney at 2:01 AM 14 comments: 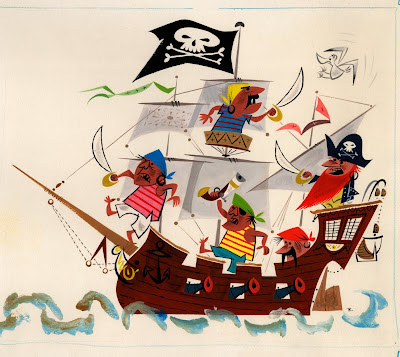 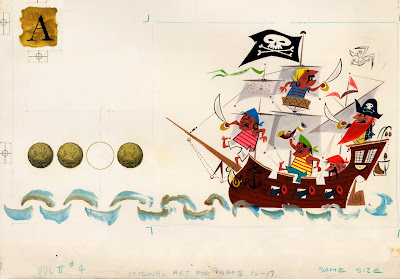 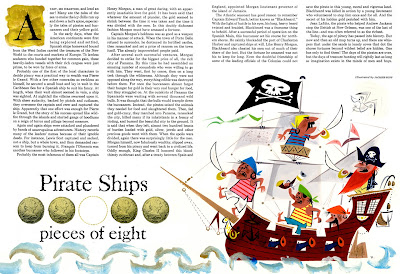 The final published spread!
Posted by Kevin Kidney at 1:54 AM 12 comments: