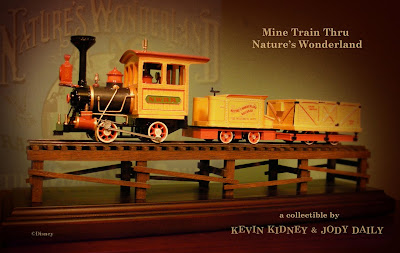 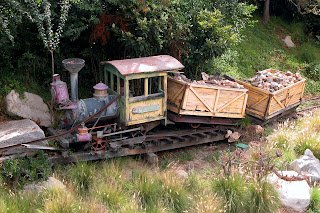 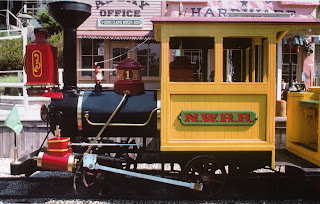 Train #1 in happier days.
Our replica of the Nature's Wonderland Mine Train #1 will be released this fall, as part of the ongoing celebration of Disneyland's 55th Anniversary.
Posted by Kevin Kidney at 2:08 AM

These collectibles you have designed that you have been posting are fantastic - keep 'em coming!

Yet another beautiful piece. I had no idea the train was gone from the park; I guess I'm lucky I made my first trip out there last fall while it was still visible. I was shocked at how many traces of the old train route remained - I figured it would have been built over years ago. The Mine Train is the ride from Disneyland's past that I most wish I could go back and see for myself...

As a total NWRR enthusiast, I gladly approve! Fantastic!

Your items are always so great but this has to be one of my all time favorites!!!!!!

Please keep us informed as to when this will be available. I will definitely make the long trip to make sure I can get one of these.

Kevin, you know for a fact that the Archives got this? I was wondering what happened to it. Given its condition, I was afraid that it might have been scrapped when it was removed from the Park.

Yes, Dave Smith announced at our NFFC presenation on Wednesday that the train had been given to the Archives. I (half) joked that Jody and I would be happy to restore it for them. :-)

I saw a prototype of the model at the Disney Gallery. It is really a stunning piece. Does this model roll? And, what is the bulk of the material made of? The prototype looks very glossy, and has the appearance of ceramic. Thanks for all of the work your team produces.

Isn't there another unit (in better condition) up in the Imagineering Warehouse? I know they had it at the Autry a few years ago for a Disney related exhibit there...

and, someplace backstage at Disneyland is still a bell from one of the old mine train engines...it used to grace a fruit cart that was stationed across from the Splash Mountain drop in Critter Country...that cart as long since passed on, but, the bell is probably in prop storage, somewhere...some of us had been trying to get the bell for the Red Kerchief League....sadly, it never happend...

This looks fantastic! I hope there will be enought that us "avg" collectors can get them with out having to go to the "resllers" at high prices !
I saw the empty track in June and the captain said it was being refurbished. Great rendition.