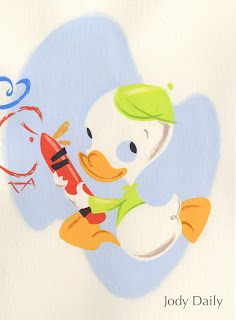 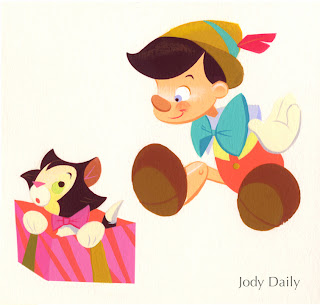 Another one of my favorite small Jody paintings
-- this one done almost ten years ago while we were at Disney.
Posted by Kevin Kidney at 7:00 AM 2 comments:

Time for lemonade and cracker jack... 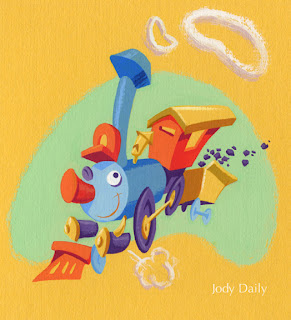 Casey Jr. circus train by Jody.
Posted by Kevin Kidney at 7:00 AM 4 comments: 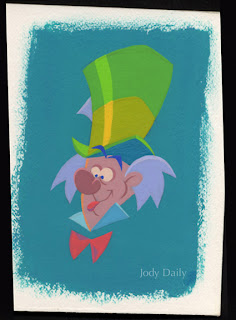 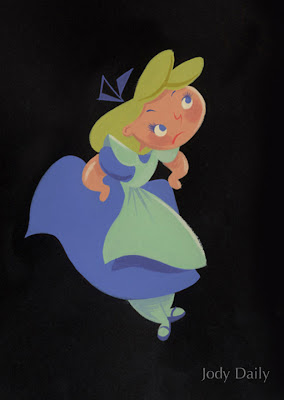 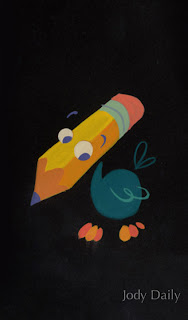 At last we come to the final chapter of misty, watercolor memories of Disneyland's Fantasmic!, which celebrated its 20th anniversary last week.  Jody and I attended one of the four special late-night showings presented at the park, (complete with commemorative cupcakes) and I'll admit to feeling pretty nostalgic through it all.  To be honest, I hadn't seen the show all the way through in quite a long time, and it was fun to revisit it with friends.  I had kind of forgotten how weird the show is. The "story" of Mickey having a dream is really not that important, but as in real dreams, Fantasmic is better explained as a series of changing moods and emotions: happy, mysterious, bizarre, lovely, tense, scary, and finally happy again.  The show's a trip.  At the anniversary party, I was especially touched to catch a snippet of my animated dragon test projected onto the water screens during the pre-show.   Now that was cool!

So, for you Fantasmic fans out there, here are a few more odds and ends saved in a falling-apart banker's box all these years. 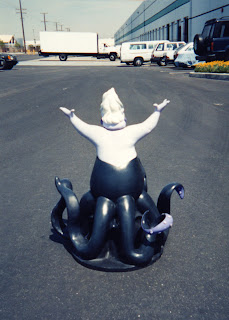 Ursula takes matters into her own tentacles...in Disneyland's Olive Building parking lot (610 Olive Street, in Anaheim's historic district -- a secret, unmarked warehouse that has since been demolished.)
Incidentally, if you happen to own a copy of the rare Fantasmic! souvenir booklet published in the nineties, you can see this model pictured on page 16.) 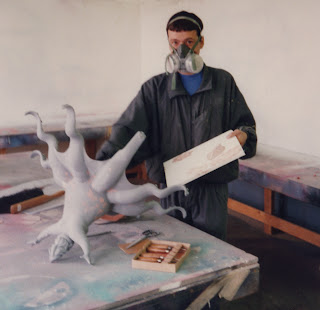 Vladimir Petrov installs improved tentacles onto my Ursula sculpt.  Vladimir is one of Disneyland's valuable secret weapons, having sculpted a gazillion famous scenic pieces for the park.  He is a GENIUS. 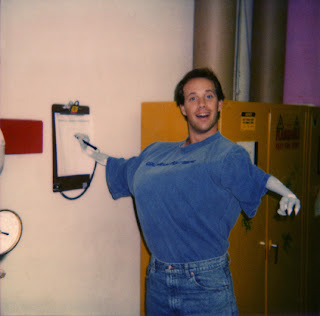 Rich Collins, who sculpted the final dragon model, always cracked
me up. Here he clowns around with teensy dragon arms.

The Kaa model, also by Rich, was carved out of surfboard foam.
(Those jazzy hands in the background belong to Barnette Ricci.) 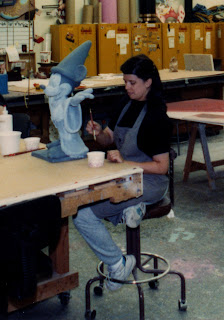 Here's Jackie Perreault and her unused "Finale Mickey" model.  In one of the many early concepts for the show, Mickey was to grow into a giant inflatable for the show's finale. I'm glad that scene was cut, although Jackie's model was adorable.  Incidentally, Jackie went on to sculpt some of the most popular character figurines for the Walt Disney Classics Collection, and the full-size Sebastian animatronic in the Soundsational Parade.  Jody and I always try to get Jackie involved with our projects. 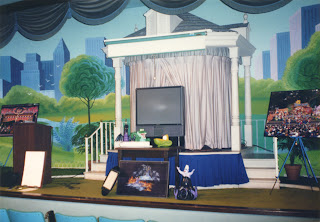 And finally... can you guess where this photo was taken??  It's a surreal location for one of the many Art Department presentations I had to do in the '90s.
Posted by Kevin Kidney at 3:03 AM 6 comments: