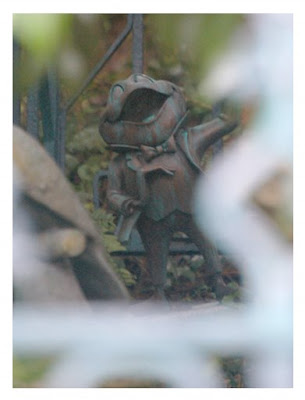 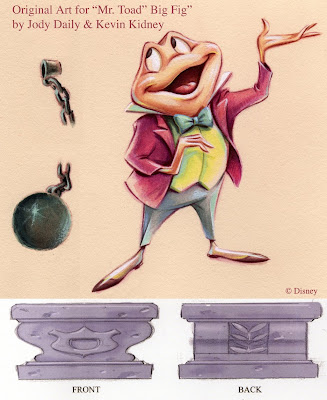 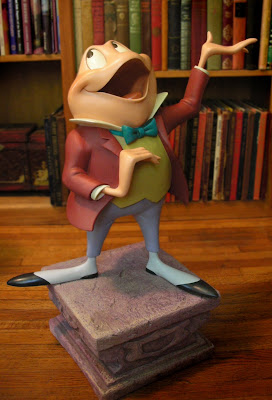 very cool - I'd display that in my house too.

it must be incredibly satisfying to see a large project like that through to completion, standing on your floor.

So cool that you noticed Mr. Toad in the Mansion's graveyard! Obviously they decided that they couldn't improve upon your sculpt. I would be flattered as well! Do you think they really just repainted an actual Big Fig, or could they have recast it in something more durable, like cement?

Was death the last and greatest mania pursued by our friend Toad in his motorcar? Did he end up in a comic hell, surrounded by funny little devils like all of the doomed passengers who rode the WDW incarnation of "Mr. Toad's Wild Ride"? I'd like to think that he went out with that sort of flair...

I have the Toad big Fig in my house!!!

I'd heard about this before from people bemoaning the loss of Toad at WDW. Sadly, I never got to visit MK before he was replaced by Pooh.

Saw your new version of the Rongo Bowl at the park earlier this week, BTW. So cute I almost bought another one (I've got the original green one)!

I too am the proud owner of this big fig. One of my favorites and made doubly cool by the fact that he's about the size I imagine Mr. Toad really to be- it's like he just hopped in!

Kevin, how about a post on the various Mary Poppins Umbrella's you've designed? They were all subtly different and I'd love to hear your thoughts on the color compared to the film. In my mind the parrot head was always white, though as an adult I can see that there was probably a green tint that was too faint to pick up on film. Anyway, I'd love to hear about that process.