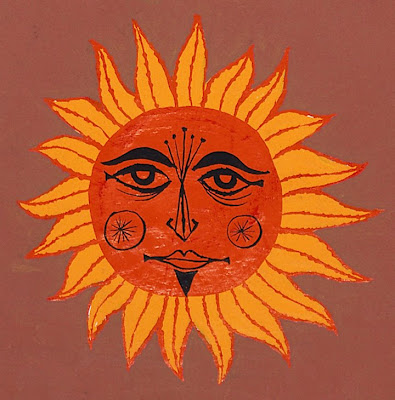 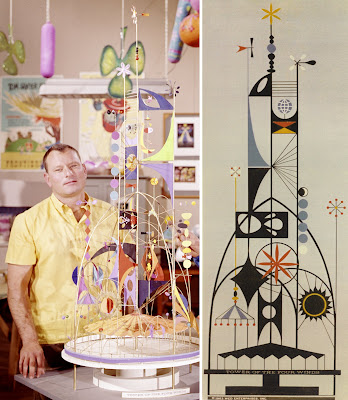 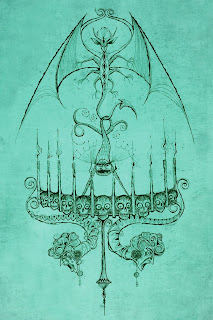 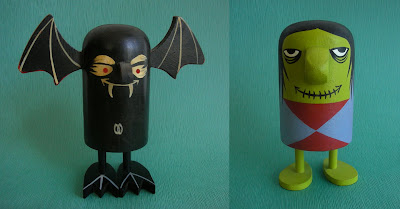 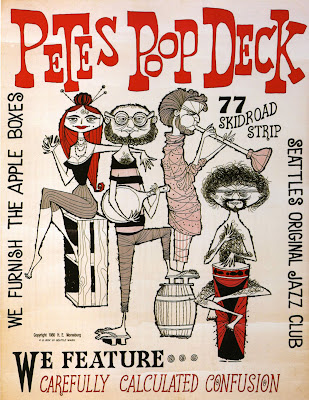 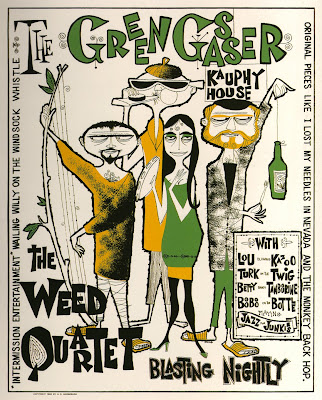 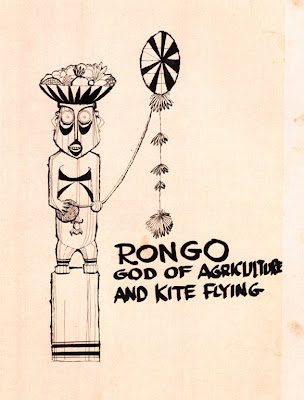 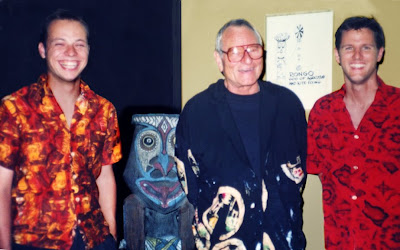 Rongo Tiki Drink Bowl at Disneyland, 2009
Cheers for Rolly, on his very-deserved tribute down at Disneyland this week. We can't thank him enough for sharing his creativity and utter coolness with all of us.
Posted by Kevin Kidney at 2:47 AM

Matt said...
This comment has been removed by the author.
5:22 PM

I have always loved Rolly's stuff, the Towers of the Four Winds in particular of his Disney stuff I think is just amazing!

Hey, Kevin! Thanks for making me aware of Rolly. I didn't know of his work, but now I do :)

Good work Kevin! It's absurd that this genius/legend is not honored with a parade on shoulders! As there are few remaining legends around, I say get them crowned as the ancestors that created dreams we now have known for decades! Cheers to Rolly! Michael

I remember Rolly's talk at the 1992 National Fantasy Fan Club convention held at the Disneyland Hotel. Though there were so many great guest lecturers at that con, I'd have to say that Rolly Crump had the biggest effect on me. He came across as a pure artist, so fascinated with the creative process and with a genuine enthusiasm for everything he got to work on in his WED Imagineering career. My congrats to Rolly for being honoured with his own Window on Main Street!

very cool!
i've never seen this version of the "tower of the four winds" print; i'm more familiar with the multicolor print. both color schemes work for me!!

did rolly create the artwork for both of these versions??

Can never get enough Rolly!

Maybe it's time for another look at his incredible work on Knott's Bear-y Tales.

Great post! His work is amazing. I was hoping you'd end it by saying you were going to partner to recreate the Tower of the Four Winds.

Hands down the most Godhead blog post I've seen yet...This'll be tough to top Kevin!

From everything I've heard, Rolly is quite a guy. Everyone seems to love him! I wish I could have seen the presentation at the Anaheim Museum...

Those who made it to the ceremony where Rolly was presented his window got a real treat. Bob Gurr and Marty Sklar were on hand and Rolly shared some personal stories about his experiences with Walt and the origins of the tiki room. It was fantastic!

And is it any coincidence that with Rolly's great sense of humor that they chose to put his window over the old "Wizard of Bras" shop?

Terrific stuff- thanks for highlighting this excellent artist.

Kevin,
Any clue on how many of the Pride Creations "Popsies" Rolly Crump designed besides the two you show?

Thanks for the comments everybody.
Graham - I'm not sure how many of the toys Rolly did concepts for. There are many out there that are obvious he didn't do.

designerd - Yes, isn't that funny, his window is over the old "Intimate Apparel" shop. I hope Rolly gets a laugh out of that!

outsidetheberm - YES! We need to learn more about the Knott's Bear-y Tales ride. This might be a job for YOU. I don't have much on it, unfortunately.

Michael - Every drawing/graphic I've ever seen of the "Tower of the Four Winds" has always been credited to Rolly, so I do surmise that both are his.

Amy - Yes indeed! I'd love to make a replica of the Tower. Maybe I'll do one for myself!

Incidentally, Did you all get your copies of the excellent "Walt Disney & the 1964 World's Fair" CD set?? It's a must-have.

What a genius. How can they not have saved the Tower of the Four Winds. SAD! Iam a big fan of your work Kevin & Jody. Very very cool stuff, Richard

Ive only just found you from Cathy's blog, I love your post. I was not familiar with this artist.
Thank you.
Brittany

Where is the window located? Any chance of a picture?

Thanks for the post! This style of 60s illustration is rapidly growing on my psyche. His stuff still looks so fresh.

That is really cool he got honored finally. I'm a fan of his work mostly haunted mansion and The Knott's Bear-y Tales ride.(which i want to know more about).Someday when joining Disney Imageneering I thought about bringing back 1 of his best works to disney which Is Knott's Bear-y Tales and that i would update Bear-y tales by adding modern effects,improved lighting,updated figures, and new scenes (a Western scene based of off of the original idea for the ride with cowboys bears,frogs, and other animals with native american Bears in a spaghetti western town,A New Bear-y Town scene which is a new before the bakery to show where the Bear-y family and other characters came from, A las vegas and hollywood type scene simialar to the great movie ride scenes,and a new circus scene (Based off a finale of the old Kings Island Ride,called Enchanted Voyage) before the fair which shows portraits of the characters like dr.fox,Tedra bear,The Bear-y Family, and other characters before entering in it with clowns and portraits of the characters like if they are the stars of the fair with some LED effects and Lights in the sky moving around before entering a redesigned beautiful country fair than the knott's original which is based off The LA county Fair)to extend it from The show building at Knott's and also remove some knott's references to make it more Disney.

Hey, Kevin!
A friend of mine suggested your blog to me, insisting that I'd love it... and the verdict is, YES, I absolutely dig it!

I'm curious. How much of 'It's A Small World' is Rolly's? That has always been my favorite ride at Disneyland. It just makes me happy, singing along while enjoying all of the puppets/marionettes and the incredible artwork! Rolly probably wasn't involved in the puppet designs, was he?

What little I've seen of your blog, so far, is completely up my alley! I will have to spelunk every nook & cranny...

Well, how about that? You have both Pete's Poor Deck and the Green Gasser! The Green Gasser was a silk screen in three colors, and cost me 50 cents to produce in 30 x 24 inch size. Rolly was fun to work with. He had a studio full of small fun items. I produced and sold them through college book stores from Seattle to San Diego and in Arizona and Nevada.

Pete's Poop Deck was the last one of Rollie's posters I published, a bit smaller than the others.
There was Big Liz, also a 30 x 24, in three color silk screen. And, I'm trying to think of the name of the third one we did.
These posters, by the way, were the beginnings of a whole new industry, and all the psychedelic posters came later, after I proved that such things would sell, all due to his origianl concepts, his terric sense of humor, like sight gags in the movies, and his colors. Buyers were instantly attracted to them.
A gift store owner, named Marge, asked me to go visit Rolly and see his things, hoping that I could promote his posters. He was such a genuine human being, sort of self-amused with his things, fun to be with.
He did some things in Las Vegas too, for Wynne.

Do you know anyplace we can see more of Rolly's work online? My son is a great artist and reminds me of Rolly.

Doc chrles masom
Hello, My name is Dr. chrles masom of University Of Benin Teaching Hospital
, I am a specialist in organ Surgery, and we deal with the buying of organ
from human who want to sell, and we are located in Nigeria, USA and in
Malaysia, but our head office is in Nigeria. if you are Interested in
Selling your Kidney, or selling any part of your body organ Please contact
us for more information. Contact us via
Email: chrlesmasomr@gmail.com
Whatsapp Number +2349035781816
Hoping to hear from you.
Regards,
Dr. chrles mason
C.E.O
UNIVERSITY OF BENIN TEACHING HOSPITAL.