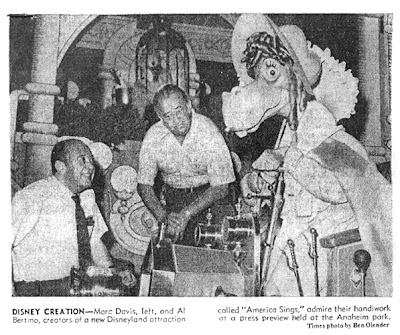 Oh America Sings. This was my FAVORITE! I loved the disco ball effect when you moved from scene to scene was so exciting for me. I had (still have) the record and played it endlessly. There is a darn skip in the Sweet Adaline Song. Thanks for the post.

What a great find. Thanks for sharing. I'm sorry to report the attraction was before my time, but what I've seen of it always looks like such fun.

The newspaper photo with Marc Davis and Al Bertino shows a moose (cow?) figure that I don't remember at all.

Hi Major, That would be the Old Grey Mare from the Gay 90s section. This attraction, along with Storybookland, was so impressionable on me and developed my art aesthetic to what it is today...for better or worse.

If any of you are interested, I made an animated version of this classic attraction. You can see a work-in-progress of it here:

Oh, Jody - for BETTER!!! I loved America Sings and every once in awhile I'll find myself listening to the soundtrack! I don't know why, but the weasel always bugged (and continues to bug) me!

There was sheer entertainment value in the attraction, and the purity with which Davis's designs were translated to three dimensions was unparalleled.

Great Post for the 4th! Love the pics! The Gators and the Hound Dawg were always my favorite characters on this ride!

Thanks for the info, Jody!

I loved "America Sings" as well, especially considering how closely the sculpted figures adhered to Marc's original sketches. Ironically, when they recycled many of the figures for secondary characters in "Splash Mountain", they looked better than the main cast of Br'er Rabbit, Fox and Bear. Somehow the newer audio-animatronic designs lack the panache of the older ones (in my opinion anyway).

By the way, if you haven't already done so, please give your eyes a treat and check out the animated interpretation by James Lopez that he has provided the link to in his comment above. I absolutely loved it, James! I hope you have an opportunity to continue work on it in the near future.

I loved this attraction so much! Thanks for the post, with great pictures, and reprinting the article from opening. America Sings made such an impression on me, and I made sure to see it every time I was at Disneyland. So many great memories.

Also, James Lopez, your animated version is AMAZING! For years I've dreamed about 2D animated version of this, and the Country Bear Jamboree. I could see the animation in my head, in the classic Disney style, and you've basically made my visions come to life! Thank you for all the work you put into it, it's amazing to see something I've wished for come true like that.

As someone who didn't get out to Disneyland until WAY too late (I get to WDW at least once a year, starting in 1972) this is one of three attractions I really, really wish I would have seen (the other 2 are Inner Space and Mine Train).

(I dunno if the late-to-WDW west coasters feel the same about, say, Mickey Mouse Revue or the Swan Boats at WDW...)

No doubt the highlight of each trip to Disneyland in the '70's. I saw this so many times I can still sing the songs in order... Great article!