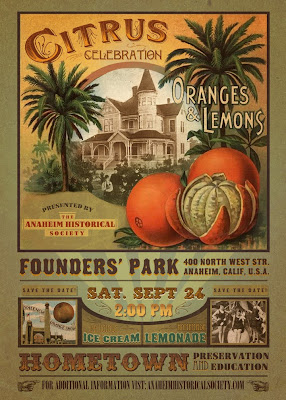 So, how was your summer? Wonderful, I hope.  Mine was outstanding.
This summer Jody and I went to a bunch of great parties (and threw a couple of really good ones, ourselves), we took some memorable road trips with friends, enjoyed countless bicycle rides on both U.S. coasts, finally landscaped the backyard, and still found time to hang out as much as possible with all our neighbors at the Anaheim Brewery.
But this doesn't mean we goofed around from May to September.  We also worked our tails off.  The Soundsational Parade opened at Disneyland in May and we were part of the promotional hysteria at the beginning.  (As a birthday present from the Disney team, I got to be a chimney sweep in the parade's premier!) We debuted new collectibles throughout the summer, for Disneyland, Walt Disney World, and D23.  We contributed to the new Trader Sam's enchanted tiki bar (and designed a line of custom drinkware that will appear at Sam's sooner or later). We built a pirate parrot, and now we're tackling an exciting project for Tokyo Disneyland.  All in all, one of the best summers of my life.
But one other thing happened this summer that on the surface might seem small, but for me is huge.  I fell in love with the city I live in.  So did Jody!  Anaheim is a uniquely American city with an amazing history, though it has always struggled to find an identity of its own. Except to those who actually live here, most people consider Anaheim to be synonymous with Disneyland, but I've discovered there is much more to this town than that.
In July I had the unbelievable good fortune of being elected vice president of the Anaheim Historical Society.  It's a 35-year old organization of enthusiastic folks who help preserve the history, public art and significant architecture of the city for future generations.  Anaheim's Historical Society is especially vital, and a fantastic organization to be a part of.
We're about to have our annual kick-off event on Saturday, September 24th and I sincerely hope everyone reading this will come.  The "Citrus Celebration" in Founder's Park will be a wonderful little "small town" event with tours of two historic houses, the gigantic living tree that inspired Disneyland's Swiss Family Robinson Treehouse attraction, orange soda & vanilla ice cream floats provided by Ruby's diner, fresh Anaheim-grown lemonade and presentations on the agricultural era for which Orange County is named.  We're putting a whole lot of effort into this so I hope you can come down and experience an Anaheim I'll bet you never knew existed.
And I hope you'll consider becoming a member of the Society, as well, even if you don't live in Anaheim!
More about Anaheim Historical Society and the Citrus Celebration here.
Posted by Kevin Kidney at 3:25 PM

Kevin - This looks like a wonderful event! I am sorry that I can't attend.

Your blog really makes me miss Southern California. I hope you and Jody can make a visit to New Orleans in the upcoming year. xoxo

Congrats on the VP! I grew up in Anaheim and miss it an awful lot.

Check out my tribute to Katella Avenue here...

I used to live in Anaheim and loved it. Now I live in Vegas & wished I still lived in Anaheim!
Hope you have a big turnout for your event!

Well, big congrats on being elected vice president! Not sure if I'll be around that weekend, but it sure sounds like a really swell event. This weekend we are definitely planning on visiting Trader Sam's for the first time, I can't wait! Also, I was in World of Disney the other day totally admiring your work, particularly the Mad Tea Party cups and the popcorn box. So perfect!