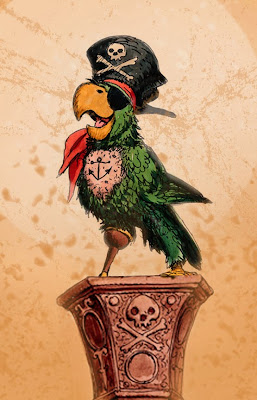 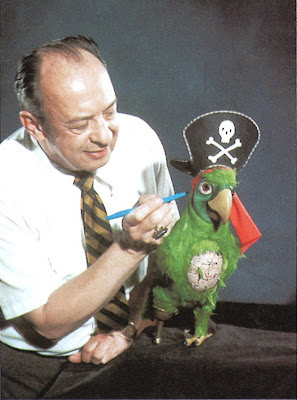 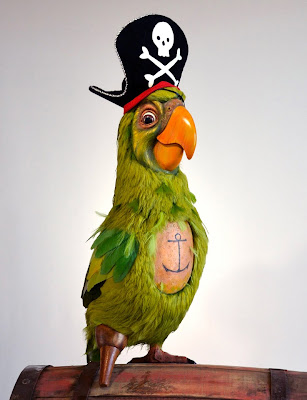 Who would have guessed, you two put a little booty in the barrel.

toodaloo pirate parrot! I am sure he will find a fabulous new home!

Oh man! I want to know the secret. I'm going to guess and say that there is some small piece from the original ride. Or else you guys left half a sandwich inside by accident!

I think your parrot looks better than the real animatronic did! How about a replica of the America Sings Eagle for your next project?

Please Kevin, tell us the secret of what's inside the barrel !!!

Wow, that looks fantastic! Is it sacrilege to say this version looks better than the original? I know the original was working animatronic, but still... Would have loved to be at Sam's last week when you came in with this guy. Any chance you can get approval to tuck a new animatronic like this some place in Trader Sam's? I love Sam's but this would be a really fun addition.

I was very excited and surprised to see you, Jody, and the Pirate Parrot in Trader Sam's when I walked in to meet the rest of my party at the bar. He looks even better in person, and thanks for bearing with me as I tried frantically to work my camera (I just bought a new one and am not at all familiar with it!).

I was the second to last person to bid on it. Darn my meager savings. It would have been a centerpiece in the Tiki Den that my wife and I are building. Oh well, Kevin and Jody are still welcome when it's ready.

that was lovely art nice to see them,, though I am not hardcore fan,, but this time your art touch my heart,,

We missed having you and Jody there at the big auction! Well done on the fine feathered Pirate Bird!

You did a truly beautiful job.

I was at the auction that night. I had hoped you guys would be there to present it in person so that I could say hi. It is such a beautiful piece. For me, this lot was as exciting as both the Peter Pan vehicle and the Hitchhiking ghosts! Thanks again for sharing such a great piece. See you in Orlando for the WDW 40th!

MINE! I guess not yet-glad you sold him and got a fair booty! What was in the barrel???