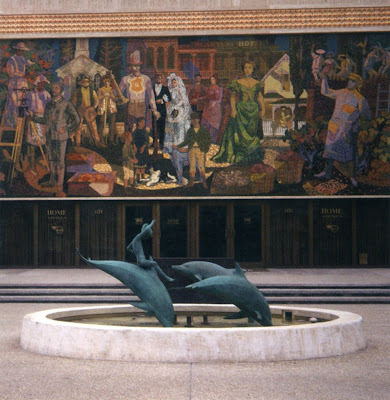 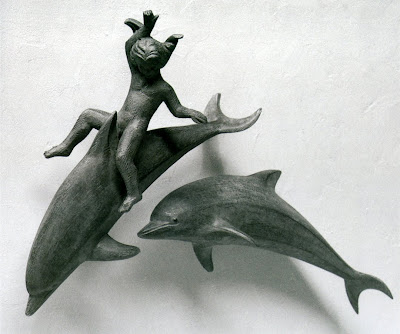 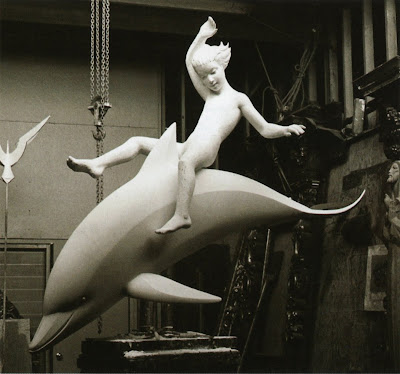 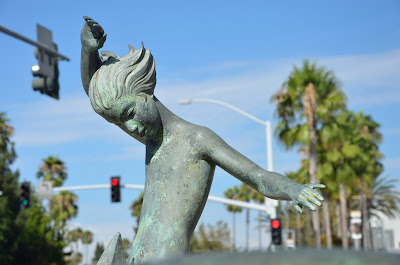 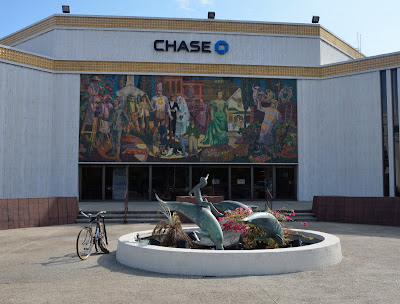 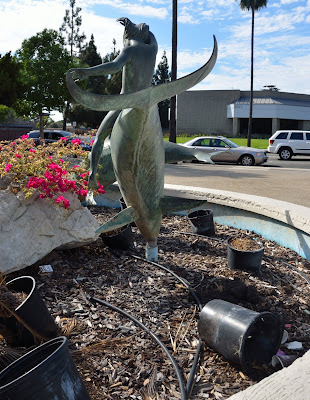 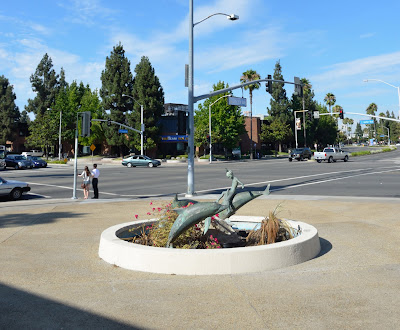 Kevin--it's is so amazing that you did this post! On wednesday of last week....I finally...after years of passing this structure (I'm a big fan of the muralists for these banks ( Millard Sheets/Susan Hertel/Denis O'Connor) and parked my car and photo-documented and took some general measurements of this structure and surrounding entry plaza with the fountain(...for a future project........)I was sad to see the fountain not working, and that the complex wasn't kept up with pride like it once was. I looked about the fountain to find an details on the artist........I almost fell over when I saw your current post!!!! I get worried that these banks and other structures with public art are gonna start disappearing.....

True. I too have always marveled at the artistry of the original Home Savings structures and decor...truly 'temples' of money.

The take-over by Chase is just another example of the homogenization of America, especially among the ranks of the corporate world. What used to be driven by corporate pride and a war of taste has sadly become
a mad-dash to the middle of the road.

Now, it seems like ALL of them look on this visual ID as a liability. In defiance of their history, they have cast off the carefully crafted color palates and logos for generic fonts and 'out of the tube' color choices.

Union 76 is a perfect example...The neat crispy orange and blue rotating 76 balls high above their service stations have been tossed in favor of awkward blued-red with near-black numeral, flat square signs...yuck.

I really hope that the former Home Savings buildings and decor fixtures get some TLC and protection as far as demolition of their exteriors.

This is yet another great post, Senior Kidney! thanks for keeping the torch of appreciation well lit!!

Gee,I don't know if Chase could afford to restore the fountain. After all, the government did have to give them BILLIONS to "bail" them out.

...actually, looking at the sculpture again, if that dolphin stops short, that kid is screwed!

I've always admired the old Home Savings murals, and when my grandma would take me to the bank with her she would let me stand there for a few minutes to take it all in. I think the one in Encino was a Millard Sheets example.

thepicklebarrel... amen! I saw an exhibit years ago (I don't even remember the theme); there was a full-sized Union '76 ball right at floor level, lit up. People would actually go up to it and hug it!!

I LOVE your blog! I just drove by this bank the other day. The statue in particular got me to thinking about this song.

Someone needs to clean out the clutter and turn the water back on.

We are so transient. It's a beautiful work that has a part of someones soul in it and it gets treated as disposable. Not much more than a creative waste basket.

I was about to say more, but thepicklebarrel said it nicely.

After your post, If I lived near by I would maintain it as a volunteer. Chase willing.

that would be ideal. it is a beautiful piece.

The Corporate ideal is a doug heap, and their idea of civic beautification is a cesspool.

Even the insides of these once beautiful banks are being obliterated, by false partitions and a Martha Stewart color palette. .... "Vomit"

Keven: In our town, we now have a zoning rule that will not allow any sign more than 6 feet high unless it is part of a building facade. ALL businesses were given 5 years to change, and they all waited until the last month to do it. The town now looks a lot cleaner, and there are no high-rise signs to crap up the place. This zoning rule also included moving all power and phone lines to underground. A major example was the removal of the giant KFC rotating striped chicken bucket, and replaced with a cleaner more modern version, and includes the face of the Colonel.

After all the logos and signs were changed, our town reported an INCREASE in sales taxes. This increase was tracked by asking people their zip codes, and it was found that half was from visitors.

Not all new is bad.

This is a great post. Would you allow me to cross-post it at http://adamarenson.com/homesavingsbankart as a guest post?

Anyone interested, please be in touch as we work together to learn the history of the art and architecture of Home Savings and Loan, and preserve these remarkable urban landmarks.

Hi Adam,
Yes! Please feel free to repost this on your site (which is wonderful, by the way). There may be some good news coming that relates to this sculpture and I will keep you informed. Thanks!
-Kevin

Love the attention you are giving to this beautiful work, its history and its current state of neglect. Hope it makes its way to someone caring in the PR department at Chase...

Unknown said...
This comment has been removed by the author.
9:15 AM

Great blog article. I thought you might want to know that I specifically credited and linked you to my own blog article on Downtown Anaheim. Thanks a bunch!
http://ocstructure.blogspot.com/2014/09/downtown-anaheim-is-on-rise-part-ii.html?showComment=1412209101785

Thank you for sharing such a nice article. I love it.Please visit Office Furniture Miami