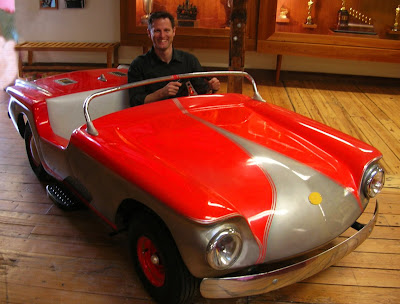 Not long ago I had the opportunity to preview the new  Walt Disney Family Museum opening in San Francisco this fall.   This 1954 prototype Autopia car is a total charmer.  Sporting a deluxe red and silver paint job, cushioned seat, dashboard gages, and sealed beam headlights, the little car is a donation to the museum from Walt's own grandkids. 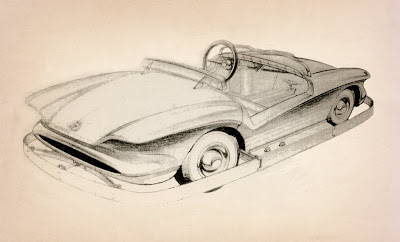 Designer Bob Gurr's drawing for a 1954 presentation at WED. 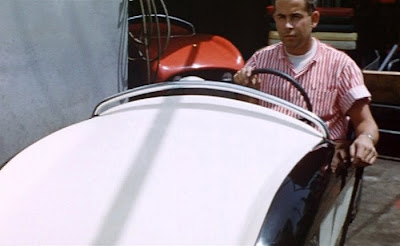 The daring young designer himself,  Bob Gurr takes a test spin in one of  two original cars painted like black and white police vehicles in April of 1955.  Most Autopia engines had governors on them to limit speeds to a safe 11 mph, but the two Tomorrowland police cars could travel as fast as 25 mph.  Bob has explained that sometimes the engines in the regular cars could overheat, causing the governors to quit, "and then some lucky kid could really go fast."
Posted by Kevin Kidney at 11:20 PM

Fantastic. The museum is on my list to visit.

Can't wait to visit. I see there is a Fess Parker exhibit...Might there be any kind of exhibit about Walt's discovering (and mentoring) Annette?

I haven't seen everything the museum covers, but it's going to be an outstanding place.
Incidentally, Jody and I are currently creating special art and merchandise for the museum. It's an exciting project.

Another awesome post! WOW the museum is going to be fantastic. Super that you're involved with the art & merchandise, even MORE reason to visit! Thanks Kevin!. P.s. could ya smile just a little more in that pro-type autopia car, you lucky dog!

Kevin-
I look forward to seeing what you and Jody come up with. I'm not opposed to collecting more of your prints ;)
-Emily

Thanks for your comment, Emily! We'll see what we can do ;)

Vintage DL Tickets - HA! I assure you, the moment I stepped out of the car, I stopped smiling.