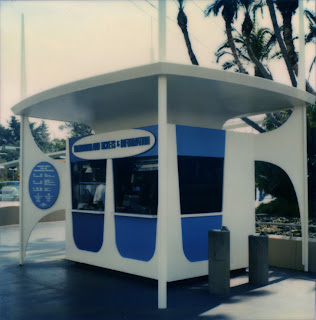 "Tomorrowland offers new frontiers in science, adventure and ideals," says its 1955 dedication plaque. Design could also have been added to that list, as this most ever-changing realm of Disneyland has been a challenge to Disney Imagineers from its inception. The question: how to style the future for an audience of today?

Walt Disney had admired the flair for colorful, structured motion in the designs of young artist Rolly Crump. For the all-new Tomorrowland of 1967, the Imagineer created a Central Ticket Booth which satisfied the area's broad demands: it delighted mod contemporaries, but also seemed poised to defy gravity and blast off at any moment!

It is amazing to see the level of design that went into practically everything!

That's the best shot I've seen of that Ticket Booth...of course I have the set of 4 that you did for the 50th, with the Adventureland one being my fave.

I really like your artwork...You are quite a talent. Hope to someday have one of your pieces decorating my place.