I Speak For The Tree...Part Two 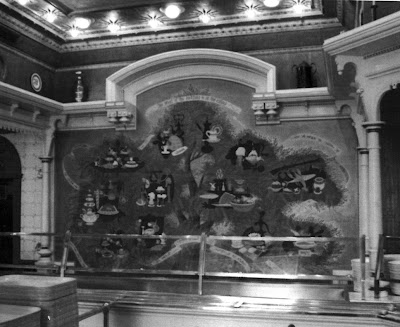 Two months ago I wrote a sort of eulogy to a lost piece of art, the original Plaza Pavilion mural at Disneyland, a painting that had sparked my imagination as a kid, and has continued to be a source of inspiration to me in my own work. Since then, that post has received more hits, more "tweets" and garnered more responses than anything else I've written for this blog. Many responses arrived in my email or as facebook messages, and a great deal of them came from within the Disney company itself. Some were from anonymous writers (or acquaintances who requested to remain anonymous). The post seemed to have hit a nerve with many like-minded people, especially people who create art themselves, or hold creative jobs.
Recently Disneyland unveiled their brand new Jolly Holiday Bakery in the Pavilion space, and I have to say it's wonderful. It's truly one of the most delightful and inviting interiors at Disneyland today, and the food is really great, too (try the Waldorf chicken salad sandwich with tomato soup.) The wall that once carried the mural is gone now, but the custom moulding that framed it remains. Disney Imagineer Kim Irvine lovingly handpainted a subtle tribute to the mural with a similar tree overflowing with Mary Poppins references. The week the bakery opened to the public, my inbox was bombarded with cell phone shots of Kim's painting from readers who had recognized the tribute. I highly recommend visiting the new Bakery, which has become my favorite place to eat in the Park.
However, the search for some decent documentation of the original Pavilion mural continues. Incredibly, two people have come through with their own shots of the mural, and granted permission to share them here. The color photos below are courtesy of my friend Greg MacLaurin, a creative genius himself, who snapped these photos in the restaurant decades ago. He could only provide these lo-rez shots, but I assure you they are better quality and show more detail than anything we could locate in Disney's official files. 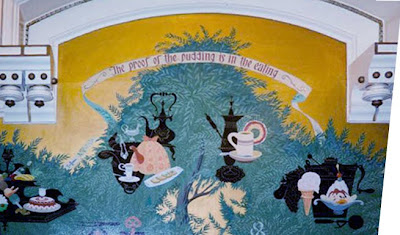 The color seems close to the original, though the flashy metallic gold background is reading here as mustard yellow. Greg's photos were taken from the serving line and at an angle to avoid his flash bouncing off the surface and back into the camera. I've distorted the frames in photoshop to flatten out the art as much as possible. 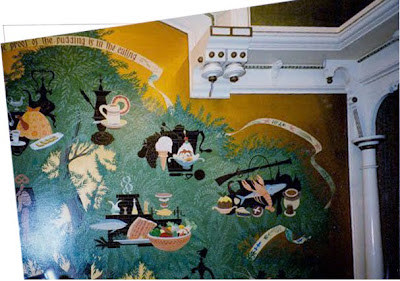 Seeing these images, even fragmented as they are, makes me happy. And this brings up a key lesson on historic preservation and the importance of keeping documentation. When a work of art is lost, whether it be a mural, a beautiful old building, or an original movie negative that has decomposed - it can never again be experienced as it was intended. Photographs, if they even exist at all, become the only portal to stepping back in time. To date, the images I've posted are all that we have, and to people who care - like you and me - they're as valuable as gold. 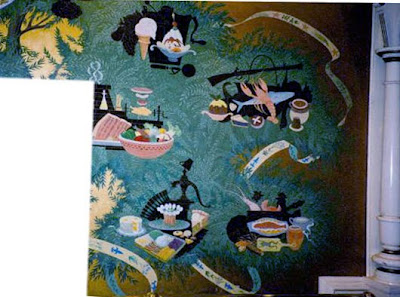 Look, there's the frog on the cutting board -a particular source of squeamish delight to me as a kid. 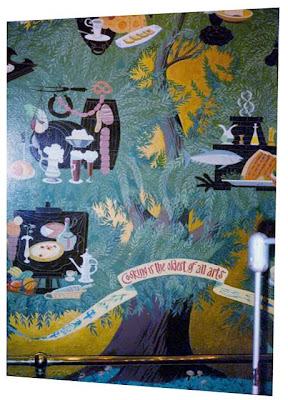 And, check it out! At the base of the trunk, there are little mushrooms growing in the grass; a wonderful touch that I had forgotten all about.
If anyone else out there has a picture (even just a glimpse) of this mural stashed somewhere in a family album from a past trip to Disneyland, please consider sharing it with us. Together we can make sure a small, lovely detail of Disneyland's past won't ever be forgotten.
Posted by Kevin Kidney at 10:32 AM

Your post is an amazing testament to the power of the web! Congrats on the uncovering of more vintage photos of the mural. Glad to hear the Jolly Holiday is a winner - looking forward to trying it.

Oh my gosh! I remember that! Golly, I'm old. LOL

One of the many terrific, but long lost Disney murals. How about Horizons? Journey into Imagination's mural is still there, but for how long? Someone needs to start documenting them now for future generations.

Alas, WDW has even less regard for its history than DL, so I am not hopeful.

Thanks for keeping this going!

Having worked at the pavilion 1975 to 1980 I remember that murial fondly. Brings back many memories of working at the Pavi as we called it