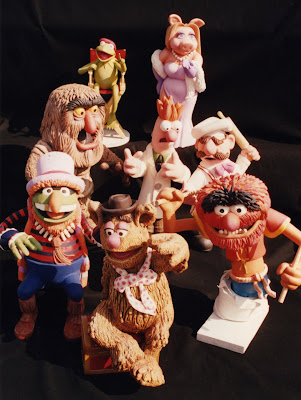 Painting the Matterhorn green? Replacing the Mickey flower portrait with Kermit? Wow, the fact that these ideas were even seriously considered is incredible. The Muppets are great, but come on. Also, it seems (by today's standards) that acquiring the Muppets for 150 million was a bargain.

Love the photos of the sculptures!

What a great idea! Nicely executed, of course. All that was missing was Bo following the parade, sweeping up.

K.G.: If I recall, the concept designs/poses were supplied to us. There was also a stack of xeroxed sketchy "model sheets" supplied by Henson for each Muppet - not an official style guide, per se, but B&W copies of turns showing how each puppet looked with legs and feet. We went off those for the models.

Nice models! While I love Disneyland and like the Muppet's, like I love chocolate and lobster, the two do NOT belong together --even for one Summer.

Also Kevin--you forgot to mention that MUPPET'S 3-D was proposed going into the Main Street Opera house as well as "The Matterhorn taking on a shade of Miss Piggy Pink" .....as the press announcement claimed. The press also refers to a "Muppet All Star Motorcade".

I actually think some of those ideas are really fun. Growing up if I had to pick sides I would side with the Pig. I was never a princess girl. it would be like seasonal or special events that happen through the year that I think could have been a MUST SEE - like the holiday Small World. We all love the classics but sometimes the idea of shaking it up can be exciting. I hope this new movie brings a new audience to love the old Muppet productions - and Muppet 3D gets a little love.

ooh, you got to sculpt my two favorites. Some of those suggested refurbs just sound awful, but I wouldn't mind a Pigs In Space refurb of Astro Orbiter, even for just a seasonal application.

Fun ideas, but it would be better to add the Muppets to the park without having them eclipse beloved Disney portions. Making a MuppetLand space for them, like Mickey's ToonTown, would be a great idea. I really hope they revisit some of these plans and increase Muppet visibility in the parks. By the way, great sculpts!!