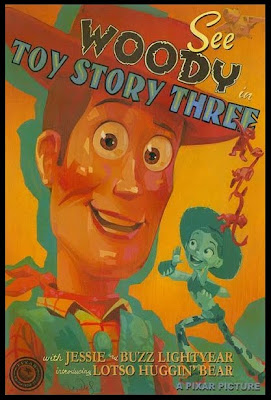 Jody will be debuting a new painting this weekend in a Pixar-inspired fine art show at the California State Railroad Museum in Sacramento.
From the press release:

While Disney fans best know artist Jody Daily through his Disneyland art and collectibles, which he creates with his partner Kevin Kidney, it is his designs for theater and theme park entertainment that occupy most of his time.  Currently he and Kevin are art directing a brand new musical parade for Disneyland® Park called Soundsational.

No stranger to the world of Pixar, Jody designed the Pixar Play Parade for Disney’s California Adventure® theme park, and in 2009 Jody and Kevin were called upon by John Lasseter’s team to create the packaging for Toy Story’s definitive toy line.

For his new painting of Woody, Jody turned to classic hand-painted movie poster art of the 1930s and 40s for inspiration. “My own personal style seems to go toward whimsical children’s book illustration, but I get really excited by the challenge of working in many different styles, from gothic to modern. I really just try to be a chameleon and create things that look authentic to whatever time and genre I’m aiming for, and keep my own present-day aesthetic out of it!”
More information about the Pixar event and artwork here!
Posted by Kevin Kidney at 10:33 PM

Reminds me of the Fox one-sheets from the 30's. Gorgeous.

Wil you be there also?

I love how Jody captured just a little bit of crazy in Woody's eyes.

Fast Custom Boxes is providing all kind of custom printed hemp oil boxes wholesalein the USA with free shipping service at your own places.

Fast Custom Boxes is providing all kind of Reed Diffuser Boxesin the USA with free shipping service at your own places.

Write For us said...

Hello There. I found your blog using google. This is a very well written article. I'll be sure to bookmark it and come back to read more of your useful information. Thanks for the post. I will definitely return. If you want to write for us visit hete: mobile app development guest post

write for us technology said...

Hello There. I found your blog using google. This is a very well written article. I'll be sure to bookmark it and come back to read more of your useful information. Thanks for the post. I will definitely return. If you want write for us please visit here:write for us technology

Line Heights is a well regarded Digital Marketing Agency in Bristol . They offer various kind of digital marketing services, such as SEO and SMM. They have worked on several projects and have delighted clients all around the world.