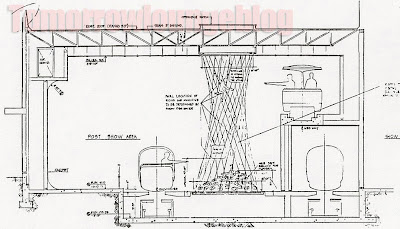 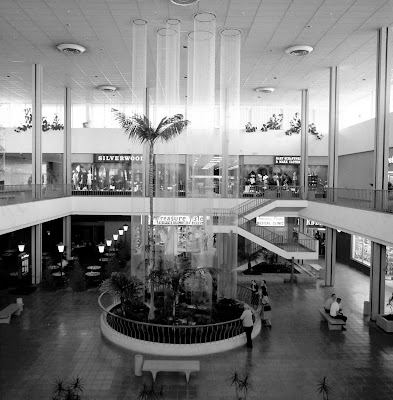 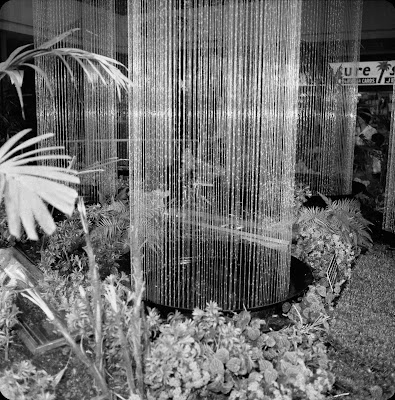 Like the magic genie in a bottle, behold the elixir of illuminated ooze.
Posted by Kevin Kidney at 11:51 PM

By the way, it's glycerine, not mineral oil. It's simple to get, ubiquitous and cheap, and desperate shops tried to sell it as 'Miracle Rain Lamp Stuff", but it's just oily, messy, drippy glycerine. Food safe, slightly sweet, and according to Wiki, about 27 calories per teaspoon.

I want to go to there.

Kevin, did you ever see the string fountain at Tri City Mall in Mesa? Not quite as big as the one pictured in this blog post, but amazing - and very '70s! Seriously, I think it was gone by 1/1/80.

The "Rain Lamp Fluid" says it is "harmful if swallowed". Maybe it was glycerine with some nasty additives?

If you check out ebay, there are lots of rain lamps. Most have a classy "Grecian" sculpture in them too. Many people mention the peculiar mechanical "grinding" noise that these lamps make, which makes me want one even more!

Spinning off Matt's comment, there is still a very impressive rain lamp inside Scottsdale Fashion Square near the food court. Next time I'm there I'll take some pictures.

This blog has left me completely obsessed with rain lamps.
Thanks for the follow up!! Love the blueprints. Man, wish I could see the mall fountain in action!!

Ya! What Jamie said!

Kevin, the most famous "dead mall" of them all, Chicago's Dixie Square Mall, had one of these. They called it the "Wonderfalls":

Yeah, i just love how we're all geeking out over these fountains. Love the pic of the sad Dixie Square Mall.

Instead of an EleganT Grecian figure, why don't you just put a Star Trek figure inside? Uhura would be appropriate...

I loved those oil lamps when I was kid. Oh, and those infinity mirror lights.

The IDS in Minneapolis has a 121 ft. fountain that extends from the glass canopy of its Crystal Court.

I totally remember this fountain at Topanga Plazza! I grew up in Canoga Park (home of the Plazza) and i totally remember looking at this thing and trying to figure out how it worked. Mind you i was about 5 or 6 at the time, but this thing was etched in my mind for years. I also remember that Topanga had a very cool Ice Skating rink, and an arcade called the "Gold Mine" that was themed like a mine with rocks and stuff.

Growing up in the former Van Nuys--now Lake Balboa I beheld first hand the wonders of the Topanga Plaza rain fountains. We regularly brought visitors there just to see them. I am currently tiki-fying my garage into a lounge and am on the search for one like my Granda used to have in her living room---the slightly naughty Grecian-lady showering amongst plastic ferns....

Ha! I've been there too! My cousins lived for a while in or near Canoga Park and we visited them on Disneyland trips...or visited Disneyland on cousin trips...not sure which exactly.
(I preferred the Disneyland part)

Anyway, I remember Topanga Plaza and the rain fountains after seeing this photo. Seemed so elegant and uptown.

Thank you Kevin and Major P for a piece of my long-lost past.

South Coast Plaza in Costa Mesa also had one. The strings flowed down on to a giant rock. I have always been looking to find a photo.

Sorry to enter this late. South Coast Plaza did indeed have one, it was near the May Co.in the original part of the mall. This one was different in that the strands were in shades of green and blue, as I recall, and disappeared into a rockwork planter containing waterfalls, ferns and tropical plants. Alas, I can find no pictures, so hoping the above poster can find some!

Also, if you look closely at current Disneyland aerial photographs, you'll see that the hatch for the Fashion Fountain is still there! It just doesn't go into anything except the attic of Star Tours.

I certainly remember the glycerine rain fountain at Tri-City Mall in Mesa, AZ. It was too small and simple to really get that hypnotic effect.

However, its biggest failing was that it caught flies. It was in the center of the main entrance to the mall, where the outflow of cool air in the daytime and the lights at night invited flying insects to come inside.

Any fly that landed on those strings was doomed, caught and then coated by the descending drops of glycerine. We went there the first day it opened, and I remember that it had caught its first fly by early afternoon.

For some reason, management didn't see fit to keep it clean, and dead flies slowly accumulated until they were its most striking feature. There were sections of the strings where so many flies had gradually compacted into a solid vertical stack that a several-foot section of the string looked like it had been replaced with thick, furry black yarn. Really, it was enough to turn your stomach. We started avoiding that area of the mall.

Long after they should have attended to it, management turned off the glycerine and cleaned the flies off the strings, turning it into a simple circle of vertical strings surrounded by bits of plastic foliage. It was pointless, but at least it wasn't gross.

You know how people are always saying that children think their lives are normal, no matter how weird they actually are? Not true. I knew darn well that that was weird.

Tri-City wasn't the only early mall in the area that miscalculated its public art. Los Arcos Mall had a little fountain at one corner of its parking lot, at the foot of its main sign. It was made of copper pipes interspersed with fat oval blown-glass bubbles in different colors. The water came up through the pipes and splashed down over the glass bubbles. At first, it was very pretty.

Unfortunately, the designer(s) had failed to take into account the mineral content of the local water, ditto the evaporation rate of an unsheltered outdoor fountain in the Valley of the Sun. Pale grayish-brown streaks of calcification started appearing within weeks.

Again, management could have dealt with it. There are cleaning agents made specifically to remove that stuff. They work quickly and they're easy to use. But management did not deal with it. Within a year or so the fountain was covered with calcification, and the water had been turned off.


Hello I work for Dale Clark who is the artist behind the Topanga Plaza Rain Fountain. I thought since you are a fan of his work and pieces of the 60's, you would be interested to know that he is the creator of many similar fountains and large sculptures. A list of his work can be found on his site StupidWise.com and he now has a gallery in Bisbee, AZ. The list is unfortunately not complete and as he is 92 now he doesn't remember all of his works. if you or another blogger come across one that is not listed I would be grateful if you notified me. Thanks, Maggie Downey

I remember that rain oil fountain at topanga plaza mall. We grew up in simi valley so it was just over the hill from us. My brother an i would sit and watch it while waiting for mom to finish shopping.