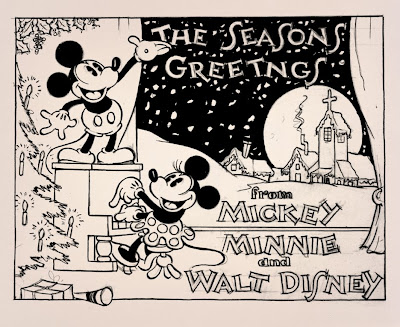 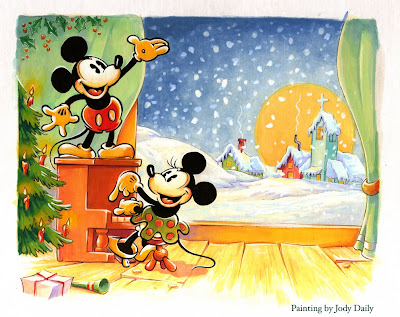 Over 70 years later, Jody completes the final painting which, in turn, is published by Disney as a boxed set of greeting cards.
It's not easy to mimic vintage paint techniques, but I think Jody did a very convincing job, making it look as though the final art had actually been completed in the 1930s.
Posted by Kevin Kidney at 12:16 AM

He totally nailed it.

Nailed is right; before reading the description I assumed it was vintage!

He can handle gouache like the "old masters". By the way, notice that on the concept sketch "Greetings" is misspelled as "Greetngs"!

The inking on the painted version is perfect.

Fabulous! Now where can we buy these cards?

Kevin, I like your new Flickr thumbnail photo feature on your blog. I just saw the picture of the "Return to Oz" puppet offer ad---Oh my gosh! I have never seen those before!

Thanks Dan, I own a set of those hand puppets! The Gump has arms and Tik Tok is furry, but who's complaining? They're great!

Absolutely love Jody`s interpretation - bang on! I especially love the fact he did the lower face shading on the faces...just like they were portrayed in the very early 1930s. The original almost looks like Floyd Gottfredson`s work. Check out this image on my blog: http://vintagedisneymemorabilia.blogspot.com/2009/12/1st-disney-studio-christmas-card-1930.html

Wow!
Where was the original card found?

I came to visit your blog. Congratulations.
I invite you to visit my blog too. In it there are good Brazilian music, Brazilian modern dance and more.
Vasconcellos Rego

Great job! Vintage Mickey is the best and this is a superb tribute!

Hello! Greetings for the day! If you are reading this, and I would have to let you know that the author has done a splendid job with the above write-up. All the basics have been taken care of, and despite the few well-researched points, the writing style is fairly simple to understand. I am also a digital content writer and I know what it takes to write quality digital content. I have had over ten years of experience as a content writer and these days, I post my work on a few online platforms. If you wish toreview my work, click on this link: