Nose Prints on the Glass 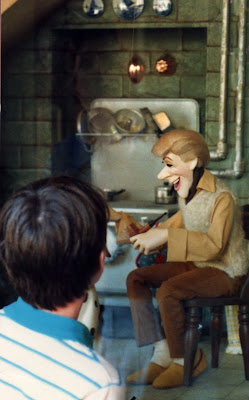 Disneyland, Summer 1986
After setting up the windows for the Manhattan Bloomingdales in 1988, our team travelled to Chicago with two more units for the Bloomingdales located at "Miracle Mile". These were bigger as they had originally been designed for Walt Disney World's larger Emporium windows. Housed inside giant rolling "shadow boxes" the units consisted of a Snow White scene (with the Old Hag at her cauldron) and a scene from Pinocchio. 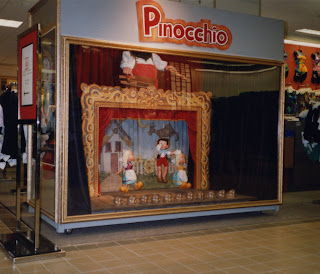 Here's another display that I believe had been created for Florida in the early 80s: 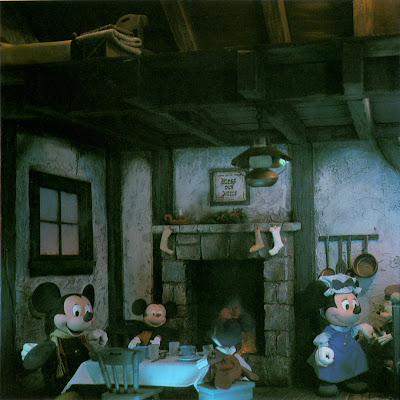 This scene from Mickey's Christmas Carol is so large that, you'll notice, it's TWO-stories -- with a chair and bed upstairs! These scenes had toured around a bit, as well, including a trip to New York in 1984 or 85.
And if you still can't get enough of this, here's a magazine article from 1974 about the ultra-deluxe windows promoting the theatrical release of "The Island at the Top of the World." The windows were better than the movie!

Click for Part Two
Posted by Kevin Kidney at 2:29 AM

I remember staring at the lobby poster in amazement as we waited to go in and see the show, Island at the Top of The World.

I knew lost cities and adventure awaited me.

May not be hot now but it was cool then.
Disney was the Industrial Light and Magic of their day.

Cool! Thanks for the Christmas Carol shot Kevin. I don't know for sure if that was one of them, but if they were really huge, I guess they probably were. I remember that the ones I saw at the mall were not behind glass. They might have had a back and side wall (probably the structure of Cratchit's house, or whatever location was appropriate) but the open sides had wooden railings to keep guests out and there was a decorative book in each one which described the scene. Nice to have some confirmation on these!

Six old animated window displays from Mickey's Christmas Carol have been installed this year at the Magic Kingdom in Orlando.

I just posted a video of them:
http://www.attractionsmagazine.com/blog/2009/11/17/video-mickeys-christmas-carol-animated-windows-displays-at-the-magic-kingdom/

Brian- I LOVED the poster art with that incredible lettering, and I still do!

Eric - Maybe what you remember is something else. It seems there must've been various different versions of the Christmas Carol displays.

Ricky - Your video is wonderful!! A real surprise to see such beautiful character sculpting and animation on those scenes. So charming. I WISH Disneyland had done something special this year.

My personal wish (may not be the wish of others!) is to once again see the "Rescuers" windows that I remember from Christmas 1977. I don't have any photos of them, except of the Orville in the mish-mash display from the 50th.

Kevin, back in the late 1980s, Disney had an information center in Ocala, Florida, and one of the window displays was for Rescuers (Penny in a bucket looking for the Devil's Eye). I know I have a photo somewhere!

I did find a photo for one of the "Fox and the Hound" window displays later seen at Mickey's Starland (not a great picture) of Chief and Todd and a chicken coop.

I also remember the larger-scale animated shopping mall displays from years ago (I remember seeing Disney and Sesame Street displays).

Wow - 9 windows devoted to IatTotW? Who knew? It would be great to see a comprehensive list of windows done since the late 60s. I'd love to see more if you have more images Kevin!

I was so glad to see some of those classic window pieces return. It was always a highlight of a trip to Disneyland (along with the Preview of Coming Attractions, which I miss terribly).
Oh, Island at the Top of the World! I remember the TV ads, with Jack Wagner. "ISLAND!" (thunderbolt) "AT THE TOP OF THE WORLD!"
I did a piece about the IatTotW attraction that never was on LaughingPlace.com a few years back.

Great images, your passion for Disney is truly inspirational.

Back from a great Thanksgiving time with the family. Folks I haven't seen in 20 years. I am going to spend the day catching up with all the cool stuff you have posted. Appreciated as always, Richard.

What can I say. Just Awesome!

Dan, would you be able to share the fox & the hound photo? I've been trying to find photos from that display. Thanks!

Holly flipping NO! Figures from "The Island at the Top of the World"? OMG!