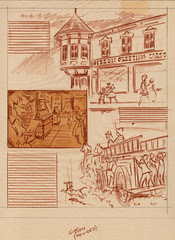 HAPPY BIRTHDAY DEAR WIFE
Our little stroll along Main Street finally brings us to the Gibson Greeting Card Shop, in this original layout sketch created for a 1955 newspaper insert.

"When you come down Main Street, you'll find one of the busiest spots in Disneyland - the Gibson Greeting Card Shop. The official Disneyland card center will play host each month to thousands of "visiting firemen," young and old, as they stop to send a Gibson Greeting Card to the folks back home.  In the near future, special Gibson Disneyland Cards will appear on the racks of this store as well as those of Gibson dealers throughout the country.

"Clanging past the Gibson Greeting Card Store on its dash down Main Street, the horse-drawn hose and chemical wagon, pride of Disneyland's Fire Department, answers an "alarm" as the "volunteers" cling tight for the thrill of a lifetime.

"Inside the Gibson Greeting Card Shop you'll find sentiments older than Frontierland on cards as fresh and new as Tomorrowland. For this is the cream of the "new look" crop of Gibson Greeting Cards --"the most unforgettable way to remember."
And the quaint old charm of the shop itself forms a sharp contrast to the newly-planned modern $3,500,000 home of The Gibson Art Company, 2000 miles away in Cincinnati, Ohio...where hundreds of millions of cards are created each year.
LISTEN!
"Gibson, one of the nation's largest and best-known greeting publishers, is one of the three sponsors of the hour-and-a-half television program of Disneyland's invitational preview on Sunday afternoon, July 17th, over ABC-TV. They will introduce the new Gibson "Musicards" on the program - beautiful cards containing a record by Rosemary Clooney singing the New Happy Birthday Song.
You have a standing invitation to visit the Gibson Greeting Card Shop of Disneyland...anytime!"
Posted by Kevin Kidney at 1:29 AM