Original gouache on illustration board for
WALT DISNEY MAGAZINE
Volume 4, Number 5, August 1959
Pgs. 8/9
TALE OF AN AILING WHALE
Artist: Paul Hartley
A whale seems to have coughed up his chewing gum (actually ambergris!) in this original illustration.  A favorite...this was my screensaver for about 5 months.
Posted by Kevin Kidney at 3:34 AM 5 comments: 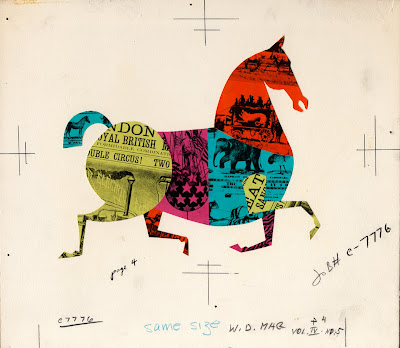 A terrific circus-themed paper collage created for Walt Disney Magazine in the 1950s.
Posted by Kevin Kidney at 4:11 AM 2 comments:

One of the world's most unique restaurants, Fantasyland's landmark galleon is wonderfully rendered - as an initial concept sketch and finished watercolor painting- for a 1955 newspaper publicity insert.

What I found fascinating is that this artwork was re-purposed as one of the Park's earliest souvenir postcards. If you happen to have handy a copy of the book "The Nickel Tour" by Imagineers Bruce Gordon and David Mumford, flip to page 21, card #0015. A shocker, isn't it!

The newspaper caption that accompanied this illustration reads:
"Riding gently at anchor in the heart of Fantasyland, the CHICKEN OF THE SEA TUNA PIRATE SHIP RESTAURANT is a magic must for meals and snacks, when you visit Disneyland. Here in the world's most colorful cafeteria, designed by Walt Disney, you will enjoy both the food and fun offered by the greatest name in sea foods, CHICKEN OF THE SEA."
Posted by Kevin Kidney at 11:07 PM 5 comments: Note the proposed Monstro the Whale water slide attraction, and the knights dukin' it out in front of Sleeping Beauty's Castle! One of the most fun pieces of original Disneyland artwork I've ever seen.
Posted by Kevin Kidney at 1:54 AM 4 comments:

We just returned from a two-week adventure throughout Germany with our dear friend, American folk artist Debbee Thibault. An incredible trip, and I'll share some of it soon.

In the meantime, while I'm coping with the jet lag, here are a couple fantastic mid-century illustrations of jets by artists Herb Ryman and Paul Wenzel. Tschüss!