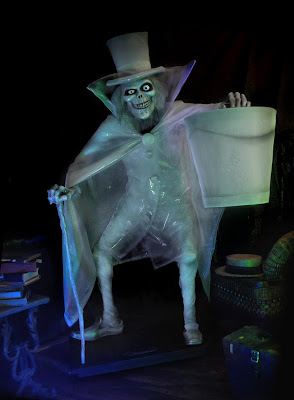 After what has seemed like an eternity, Jody Daily and I are finally able to rip the shroud of mystery off of our latest endeavor: a near-as-humanly-possible-to-exact-scale-replica of the Haunted Mansion's most perplexing spectral resident - the Hatbox Ghost!
If you don't already know, the Hatbox Ghost was originally created to inhabit the Attic Scene, along with the forlorn bride. There among the dusty clutter of old trunks and furniture, the top-hatted ghoul would confront the endless procession of Doom-buggies while dangling a hatbox from his bony hand. With every beat of the bride's broken heart, his grinning head would disappear from his shoulders, and fleetingly reappear in the hatbox.
This visual gag, as envisioned by the ride's designers, would've been accomplished by tricky lighting. A blacklight pinspot focussed on the ghost's head would turn off and on, while a small light concealed in the upper portion of the hatbox would illuminate his face inside, visible through the box's scrim wall.
In theory, it sounds awesome, but the effect didn't work as well as anticipated , and the Hatbox Ghost was removed from the attraction sometime in August of 1969, never to return. 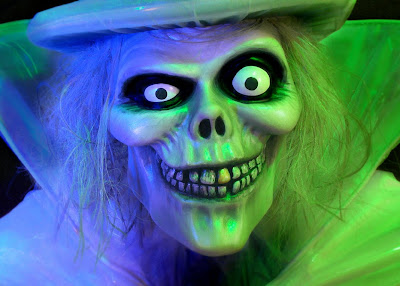 Creepy creep with eerie eyes.
Fast-forward to today, and the Hatbox Ghost has still yet to show his ugly faces in the attraction. Nevertheless, in the intervening four decades, he has risen to legendary status among his fans, Jody and I included.
Earlier this year we were invited to produce some sort of art piece to be auctioned at the upcoming D23 EXPO. Our plates were already overflowing with other projects, but we kicked around several ideas before it suddenly dawned on us what would be the coolest thing in the world to build-- our very own reincarnation of the original 1969 Hatbox Ghost character! 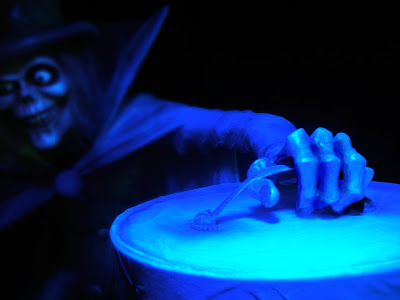 With the support of Disneyland and Walt Disney Imagineering, we threw ourselves body and soul into the project. Studying the few existing photos from 1969, and reading everything we could find on the subject (which ain't much), we cleared a large space in our studio and started sculpting. We've produced many detailed replicas over the years, but this one was the most challenging and, I think, the most rewarding. Normally our items are designed and coordinated by us, to be manufactured by Disney's vendors, mostly in China. But this one was different.
Even though it's an edition of only one, it turned out to require nearly every skill we've got. Engineering, sculpting, woodworking, metal and plastics construction, painting and sewing. Lots and lots of sewing. 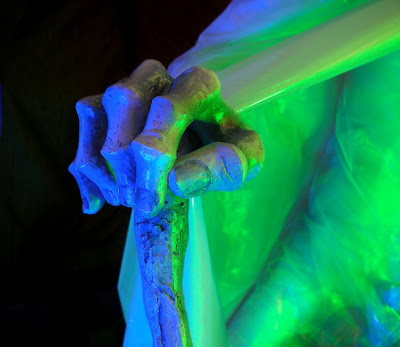 His body is plastic and wood armature on a wooden base (it rolls on casters!) designed to resemble attic flooring. His cane is reinforced steel, his hairpiece is sewn nylon fiber, and he's covered from head to toe in sheer chiffon fabric held together by miles of my own hand-stitching. The hands, head and feet are molded resin from my original sculpts (and cast by our friend Doug Hild who, FYI, molds the artist maquettes for Walt Disney Feature Animation.) Even his coat buttons are special, fabric-covered wooden turnings. When all was assembled, Jody gave the entire piece a super-deluxe custom paint job.
From the 1969 photos, the original figure's body appears to be quickly made out of bunched-up plastic drapery, similar to the plastic used for shower curtains. Our replica needed to be much more resilient, since it will be loaded onto trucks, set up in the Anaheim convention center, and ultimately packed off to haunt some lucky bidder's collection. It also needed to be relatively lightweight and safe, so chiffon fabric skin over plastic provided a vaporous ghostly effect, while holding its shape. 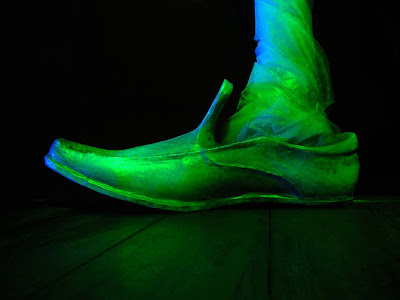 Over the span of a couple months, our 1969-style Hatbox Ghost took form. Long before he even had his hair or costume, he was already starting to look very... um, interesting! We even had to temporarily tape paper over the windows to prevent the little kids next door from seeing this freaky thing we were making.
I admit, it'll be sad to see him go in the auction on Sept 12, but in the meantime, I plan to take a lot of fun pictures of him. Our version of the figure was never intended to be installed in the attraction, but Jody and I have daydreamed of how exciting it would be to see the character brought back to Disneyland someday. Man, it would be amazing! 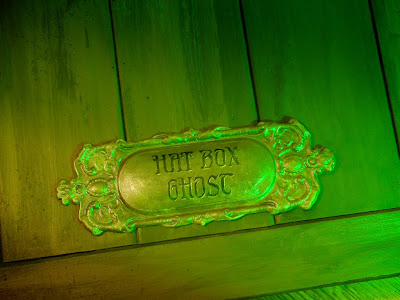 Brass name plate on the Attic floor base.
Join us for an ultimate Disney fan experience as we unveil the magic of Disney during our D23 Expo Live Auction. Disney enthusiasts will have the opportunity to bid on unique Walt Disney Studio and Theme Park experiences, tours, one of a kind artwork, props and more. 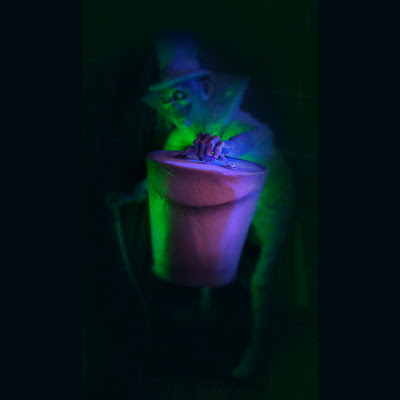 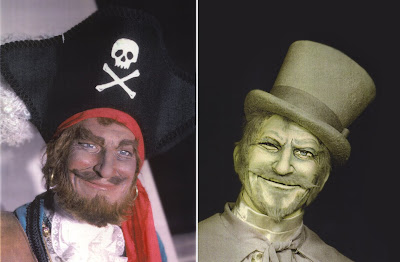 One of the most famous faces in New Orleans Square, a versatile performer able to tackle roles both dead and alive...the infamous Pirate Auctioneer (1967) and the Ghost Duelist (1969).
Posted by Kevin Kidney at 3:33 AM 8 comments: 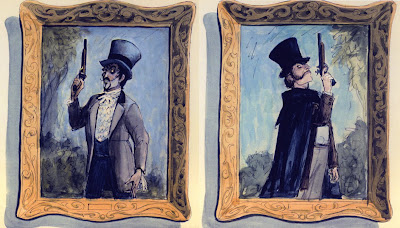 Up against the wall... Marc Davis' dueling portraits, 1960s.
The Haunted Mansion opened its doors to humans forty years ago today, on August 9, 1969.  It's still one of the finest theme park experiences ever created.
Disneyland is hosting some spooky doin's throughout the next
month, and Jody and I are excited to be involved.  Stay tuned.
Posted by Kevin Kidney at 4:10 PM 8 comments: