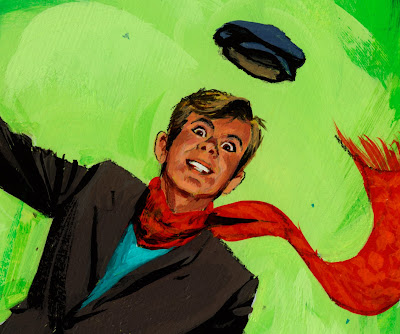 Southern California artist Nixon Galloway is best known for his paintings of historic aircraft, but throughout his career he freelanced as an illustrator for many corporations, from NASA to Disney.  In 1973, Galloway painted the front and back covers for the souvenir program of the live Disney On Parade touring stage show. These boards are simply beautiful examples of water-based gouache illustration. Galloway used the margins of his boards for mixing colors. 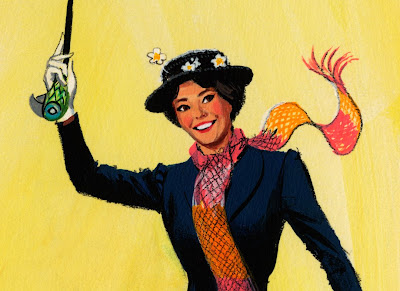 This tissue overlay explains to the layout department how to composite the various art and type elements to create the final cover for the program. The back cover scene is my favorite, with the chimney sweeps from Mary Poppins popping out in bursts of magical smoke. 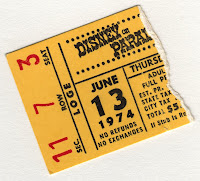 As for the show itself, the part I remember best is a comedy number performed by the relatively new Country Bears, and wondering why the three bears doing dangerous tricks on the trapeze had "real people hands" instead of paws. Some of the costumed characters seemed pretty wild to me at the time --and truthfully, they still do. For more images from the show - including the most alien-looking Jiminy Cricket you'll ever see - check out my Flickr Gallery.

SpacePotato's blog has posted a tribute to the 40th anniversary of the Disney On Parade touring shows, as well as a fine collection of images on his Flickr site!
Posted by Kevin Kidney at 4:58 AM 17 comments:

Puss n' booze? I've always loved fancy liquor bottles, like glass jewels, and especially those square-sided crystal bottles with the name of the spirit on a little chain pendant around its neck. That said, I have nothing against a heavy clay jug of "Papa's Recipe" either! 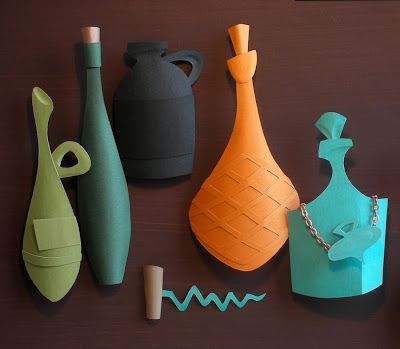 This is a new piece commissioned by my friends Johnnie and Robin. Robin is a cat fancier and collects artistic felines. (Happy New Year, you guys!)
Posted by Kevin Kidney at 10:57 PM 9 comments:

Tiki on the Bottom of the Sea 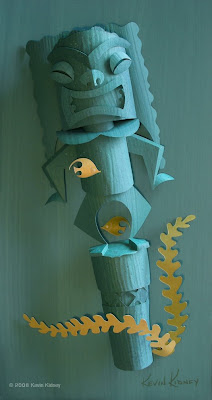 I just finished several commissioned paper sculptures, this one for a wonderful couple who had visited Hawaii on their honeymoon last year.  (It had never occurred to me that paper is the traditional gift for the first anniversary!  I could start another business!)

I suggested an underwater concept, which looked especially nice behind glass in its shadow box - almost like an aquarium scene. 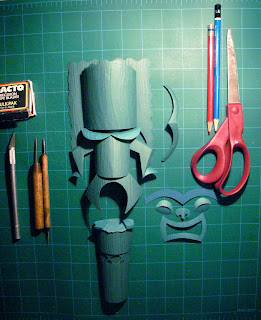 My cutting board, photographed one night at about 2AM.  I am always up late...
Heartfelt congrats to Jen and Aaron on your anniversary!  Hope the Tiki brings you fortune and happiness!
Posted by Kevin Kidney at 9:00 PM 11 comments:

A Logo for Luxuria 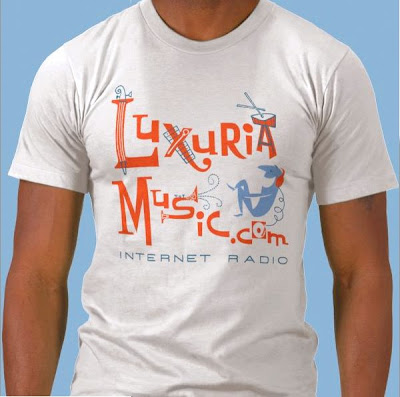 The nice folks over at LuxuriaMusic.com asked me to design a logo for them, and since I'm a hardcore Luxuria fan, I jumped at the opportunity.

It was a fun challenge to design for an internet radio station --especially one with an eclectic format of Surf Music, Sunshine Pop, Bossa Nova, Exotica, Space-Age Bachelor Pad, Jazz, Soft-Psych, Wall of Sound, Latin, Go-Go, and Film & TV music of the past 50 years.  It's just as fun as it sounds, so check them out if you haven't become addicted already, like me.

An array of logo merchandise (including some sharp T-Shirts by American Apparel) is available through Zazzle,  and the money helps to keep listener-supported Luxuria on the air. 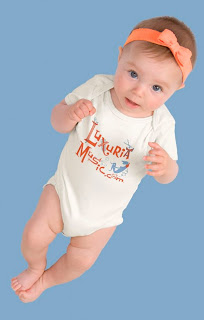 Herbie and the Traffic Cop 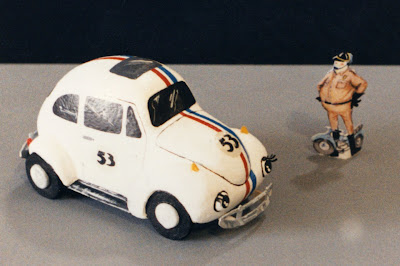 Scale Model by Disneyland's Entertainment-Art Department, 1980s.
To start things off right, our pal over at "Disney On Parole" has posted photos of an exciting battle between man and bug that you won't want to miss. 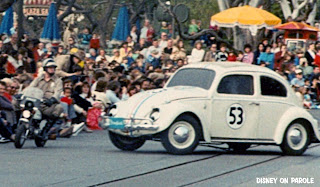 Herbie vs. the police. Who do YOU think will win?
Posted by Kevin Kidney at 3:17 AM 2 comments: