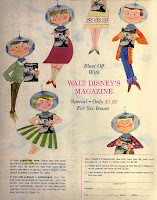 A hug around the neck to Miss Stacia Martin- an illustrious illustrator herself- for identifying the titles and artists of these images.  Thanks a million, Stacia!
Posted by Kevin Kidney at 1:53 AM

Gosh - I love those space people! Wish I could draw like that.

Matt, If anyone could, YOU could!

Great stuff, Kevin! Thanks for sharing.

Nice stuff! Thanks for posting!

Really wonderful, so clear and simple, yet so much fun to look at.

Thanks for posting such great artwork!!!

I happily stumbled upon this blog- it makes me smile! Thanks!

Hey Kevin,
Keep up the great work! We all owe Stacia Martin a big hug. When time permits give me a quick e-mail at matt@cworks.org. We have a linkedin group I think you might want to join.

how many Matt's can comment on this post? At least 4 :) I LOVE this mid-century style, especially fond of the space helmets - very Jetsons.

Kevin I am Paul Hartley's daughter. Send me a photo and I'll see if I can help!
stupedna@gmail.com